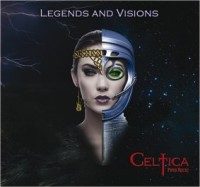 When I think of Celtica (Pipes Rock), I think of their nice gig at Burgfolk a few years ago and their very nice album ‘Oceans of Fire’. I listen to the songs of this last album quite regularly and I enjoy them still.
I was very excited when I put their new album ‘Legends and Visions’ in my player, it’s been quite a while before we could listen to some new stuff of them, so I couldn’t wait.
After a short intro and the first song which are ok we get to Alba’s Shore, and then I got this vision. Despite of the nice bagpipes, the music is really uninspired, but the background choir is really awful. There seems to be a total lack of inspiration, except for the bagpipes. The track is immediately followed by Whiskey in the Jar, a song we all know. There are lots of nice versions of this song and maybe it’s nice to hear a version like this one when you’re at a big festival, but I don’t like to listen this at home. It gives me visions, but these visions are remembering of the old days when James Last played all kind of well known songs with his orchestra. It seem to me Celtica had him as a example when they made this record. And he was very successful in his days, so when they can make it this way, there might be quite a career ahead, but I don’t like it.
The best part of the album starts with the 12th track Excalibur, with Beyond Avalon and The King’s Tournament, three songs which are sounding a bit more refreshing.

Well, that was a disappointment. Songs like Love U2! are nice, when they’re added to an album with fresh new compositions, but this album is full of ‘workovers’ of old themes. The music seems to be entirely servicing the bagpipes and together with the uninspired backing vocals, it all sounds if everybody is just doing their duty. It takes me back for about 40 years when this was ‘hip’ and done by orchestras like the James Last’s orchestra. I hope they can still put up a nice show at festivals, because that’s where this music belongs, as an intermezzo between great festival-acts, a nice warming up. And Celtica is good at this, I hope they can take their music beyond that in the future.