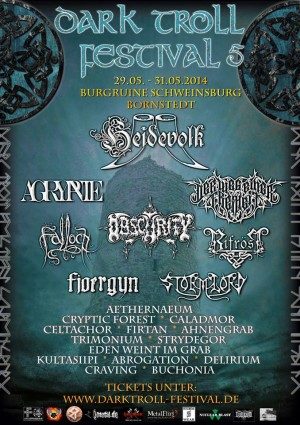 At the end of May it was that time of the year again when we travel towards Bornstedt to enjoy the ‘most beautiful festival in the world’. While this statement maybe is a bit exaggerated, we can only conclude that the location of the festival is beautiful; in castle ruins, on the top of a hill in the middle of a forest. Not only the location was superb, the line-up itself was pretty great as well. Although there were a lot of black-metalbands, there were enough folk- and paganbands to enjoy.

Dag 1
Germanitas is the band that opens the festival. They are founded in a place close to the festival, so there are a lot of local, true fans. The band plays some kind of paganblack which we would hear a lot more – and better – in the next few days. Besides that, Germanitas is a decent opener for the festival. Because Craving cancelled the second day, Germanitas performed the second day as well.
The next band was Buchonia which is also not that interesting. Melodic paganblack. Not really interesting, but the musicians do a pretty decent job. Okay, nothing more.
But,Immediately on the first day, I was surprised by the third band. In all these years there isn’t much that really surprises me anymore, but Eden weint im Grab definitely did that. Not only the style, but also the musicianship of this band is remarkable. Eden weint im Grab plays gothic rock, a bit in the same style as Letzte Instanz, 69 eyes and bands which are alike. A band which you don’t really expect on a festival that resolves mostly around (pagan) black, folk and death, but maybe that’s the reason why it worked so well. Dressed in Victorian outfits, and armed with typical instruments, completed by cello and violin, this band played an awesome show. Maybe a bit calm, maybe a bit out of place, but great nonetheless!
In contrast with Eden weint im Grab, Abrogation was responsible for the more brutal sounds. In your face deathmetal, ideal for moshpitting and headbanging. Although I didn’t know the band beforehand, the band played convincing, but please, for the love of god, leave out those solos! Often out of tune, completely out of place or dissonant it was a pure torture to listen to. Too bad, because the harsh death-metal with a great feel for melody was on itself pretty good.
Cryptic Forest is getting more and more popular lately. Of course they were on tour with Finsterforst and Trollfest, but also they appear more often at festivals. The band already exists for 10 years, and this stage experience is clearly visible. An outstanding vocalist with heavy chains wrapped around his body, ensured together with the other enthusiastic band members that the audience participated. Great closure for the first day.

Dag 2
Firtan
I got to know this band at Ragnarok, and since their show was so convincing I was looking forward to their performance. Luckily they got some decent playing time, instead of the 20 minutes at Ragnarok. It was good to see that the band profited from the extra time. Although these guys look really young, they know how to make some decent pagan black and they definitely know how to use their instruments. Harsher and more melancholic than normal pagan black, but great nonetheless.

Falloch
Unfortunately, I missed Aeternaeum and Fjoergyn, so the next band I got to see was Falloch. And while Eden weint im Grab surprised me the first day, the second day Falloch was the one to blow me away. Melodic folk/black/postrock, where the founder of Saor also helped to start this band. The influences can be heard clearly; the band paid a lot of attention to atmosphere and melody, melancholy and long-stretched acoustic passages. The band is somewhat calmer than the other bands on the festival, but it was ideal to just close your eyes and enjoy the music, like many in the audience did.

Obscurity
If the calm Falloch wasn’t your cup of tea, you would be awaked by force by the band after that. Obscurity is a band that plays harsh melo-death, and they’re quite popular in Germany. A lot of people gathered in front of the stage to see the band. From time to time, this band reminds me a bit of Amon Amarth, especially with the style of the melodic riffs, the catchy choruses and the rhythm which was ideal for headbanging. Great show!

Then we got to Der Weg einer Freiheit, a band like we see a lot at Dark Troll. Melodic black metal, and while harsh and fast with a nice sense of melody. The show these guys played was professional and simply great. The musicianship was really good, the stage presence was great. Also the audience seemed to enjoy it, since there were many headbangers.
After a great show of Der Weg einer Freiheit, Trimonium could only disappoint. Standard black-metal, without their own clear style. The temping offer to drink beer at the campsite proved to be stronger than the boring show of Trimonium, resulting in leaving early during the show.

Dag 3
Kultasiipi
While the name might misguide you, Kultasiipi is a band that originates from Germany. The music they play did fit with the name though; happy folkmetal in style from Korpiklaani. While the band played with a lot of enthusiasm, there were many notes played out of tune, and it all sounded pretty weak. Powerless folkmetal is bad in any case, but if the joyous melodies even start to bore after a while, something definitely is wrong.

Celtachor
Celtachor, the band after Kultasiipi, played a lot better. The music was a bit more serious, and a lot of Celtic and Irish influences could be heard throughout the music. The band played with a lot of passion, and mainly the vocalist tried his best to get the audience to participate. As a true frontman he was everywhere on stage, ensuring heads were banging and hands were raised in the air. A pleasure to watch, and musically it was pretty good as well.

Onto a band I was really looking forward to, Harakiri for the Sky. Black metal mixed with post rock. The sound was good, although the vocals were a bit too shrill in comparison with the other instruments. In a short time the music grabbed you, just to release you after the show. Acoustic, atmospheric passages, interchanged with intense blackmetal. Yeah, one of the highlights of this festival!
Stormlord is a band which couldn’t really bother me at the Ragnarok festival. Because a friend recommended me to give them another chance, I was standing there once again to see if the band could convince me this time. The answer is negative, this time it was hard to be bothered by the typical blackmetal.
Then came Bifrost, a band which was luckily a lot more interesting. The catchy folk-metal of Bifrost was contagious, which ensured a lot of people headbanging. The musicianship was just fine, and the enthusiasm with band and audience was great. Although the music is a lot more accessible in comparison to other bands of the festival, the band did pretty well, and they were received enthusiastically. Great show!

Slowly but steadily it became more crowded in front of the stage, something which isn’t so strange when Agrypnie was about to play. Progressive / post-black metal which didn’t only convince in a musical way, but was also played with a lot of passion. The band was recognizable by their corpse paint, and their stage performance was pretty good. There were a lot of headbangers, just as well on as before the stage. Great, atmospheric show and a great warm-up for the headliner of the evening; Heidevolk.

Heidevolk
Heidevolk was the only Dutch band of the festival, and was immediately promoted as the headliner. That the band can do this was proven many times before at other festivals, but at these festivals not everything went wrong. While the sound in front of the stage was just fine, it was clearly visible that it was different on stage. Equipment failed, and the band made some mistakes as well. However, this didn’t result in a bad show. Heidevolk struggled through the show like only a professional band could do. The audience didn’t seem to notice and partied all the way on songs like Saksenland, Wapenbroeders, Het Wilde Heer and other well-known and lesser-known songs. Great ending of a great festival!

Ahnengrab
It was after midnight when, after Heidevolk, another band started playing. Ahnengrab had the ungrateful job to play as the last band. Not really as the headliner, but more like an afterparty. This was clearly visible, because the attention drifted away during the black-metal songs, resulting in many people who walked away. Such a shame, but ah well, it wasn’t that interesting anyway.

All in all this edition of Dark Troll festival could be called a successful one. The weather and the bands were great, the atmosphere was terrific and everything was arranged pretty well. Just a small remark; there were a lot of (atmospheric) black metal bands, and while the most were simply great, a bit more variation couldn’t harm. Anyway, next year we’ll be back!