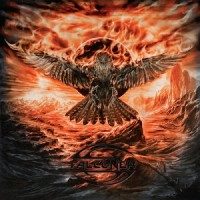 The Swedish Folk/power metal band Falconer just released their 8th studio album this month. There has been some time between this album and their last one ‘Armod’, which was released in 2011.
The whole album ‘Armod’ was recorded in Swedish and was more folk- related.

The sound on their new album differs in that way, because it contains a lot of guitar riffs and up tempo power songs. ‘Black moon rising’ is probably one of the most ‘aggressive’ albums of Falconer. If you’re really into folk metal, this album is probably not recommended for you. The folk influences are scarce on the album, but can be heard on the 4th song of the album, called ‘Scoundrel and the squire’. The song begins in a way that I felt like I was in some old pub, which was good of course, I liked this song. It was a nice piece of variety in an album full of perfectly executed and powerful guitar riffs and of course the powerful voice of singer Mathias Blad. I can definitely say ‘Black moon rising’ is a wonderful album, combined with nice artwork which fits the album.
To be honest, I’m not really into power metal, but if you do like it, make sure you don’t miss this album!