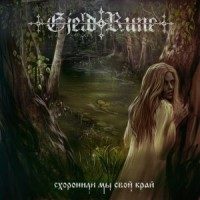 Gjeldrune makes their début in folk-metal with an first album ‘Shoronili my svoy kray’ (We’ve burried our Native Land).
These Russians may have buried their Native Land, but their music is still very Russian. You don’t get the traditional folktunes here, but it’s obvious this band carries a Slavic heritage.
The band is a nice collective with clean male vocals, solid guitar, bass and drum and a supporting role for the keys and flute. Most of the songs are rather up-tempo. Sometimes catchy like the start of the album with the titletrack ‘Shoronili my svoy kray’ and songs like ‘Ataka mertvetsov’. In spare moments melancholic with nice folk touches like in ‘Chto s nami stalo’ and ‘Avrora’.

The worst thing you can say about this album, it’s not authentic. I can’t claim Gjeldrune has an unique sound and creates unique music. But that’s the only bad thing you can say. Gjeldrune made a very nice album, with good songs, good music, nicely mixed.
Unfortunately we have no ‘best buy’ mark, because this is definitely worth it. Gjeldrune’s album is available for free at their website. This is enough to make it worth your money, but this is worth the time to download it as well. Because this an album which will fit very well in your folk-metal collection. Remarkable well done for a début!!! You should definitely buy this!!! (OMG, it’s for free!!!)