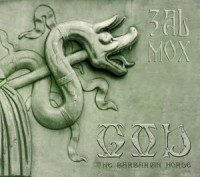 GOD – The Barbarian Horde has picked up the pace of recording stuff since 2012, the band recorded some demo’s and albums since 1994, but it became rather silent after their album ‘Aura’ in 2002.
But we saw two releases of them in 2012, they performed at Wacken 2013 and now they’re here with an EP called ‘Zal Mox’.

They call their music Barbarian metal and they mix they melodic metal with Romanian folk, like in Legea Pământului for instance where the violin has almost a kind of Gypsy sound. It’s quite speedy and doesn’t sound bad at all. The vocals sound a bit forced and that’s a pity.
Doina is a quiet intermezzo with a nice ancient natural taste, where Greuceanul is a kind of mix of the first two tracks.
And while Glia is again a kind of intermezzo kind of track, this makes ‘Zal Mox’ an EP with three longer track of eight to over nine-and-a-half minutes long, separated by 2 intermezzo’s. A nice way of working around and it creates a resting point in between the long tracks. The lyrics are nice and quite poetic. The main theme is their homeland Dacia.

‘Zal Mox’ is a preview of their upcoming full length album ‘Forefathers’, and this can be promising. The music of GOD can be quite nice, the worst element are the vocals, they seem terribly forced occasionally. The music is quite alright, not always very original, but ok. I’m curious which adjustments they can make to make the upcoming full length more interesting, because somehow it doesn’t grab me totally.