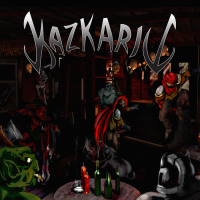 With an album title such as ‘Tavern Tales’ it immediately becomes clear what kind of album is in store for me and that’s not always a positive thing. Within the land of folk metal and all other related (sub) genres, many bands and artists often feel the need to write about alcohol-related themes and topics. In my opinion these topics are a bit out-dated, but many folk metal fans still succumb to these exploited sing-alongs. Slightly biased I start listening to the album Tavern Tales by Kazkariv.

Kazkariv is an Australian folk/metal initiative that has grown into a duo project that takes many trips to various musical styles and compositions. Although the mix of the album is not all that good, we should take into consideration that this is a two-man project from two relatively young guys. Of course, the sound is not all that perfect, but I wouldn’t call it bad either. The music that Kazkariv makes has a troubadour-like sound and is focused on telling stories. This is also what the name of the band implies, because Kazkariv literally means storytellers. The lyrics are being supported by a large variety of musical styles varying from jazz to metal. This makes the album very diverse and causes a comic effect every now and then. In addition to the thick layer of keyboards, instruments such as the flute, trumpet and violin are used. Unfortunately the vocals are not all that good at times, which really detracts from the album. However, while I listen to the album I get the feeling that the guys from Kazkariv don’t really take their music seriously themselves.

Tavern tales has become a varied album with many trips to other genres, but the suggested metal content is hardly present on the album. This duo would probably do great on a small stage in a folk/medieval related event, but this isn’t something that I’m very fond of personally. Kazkariv still has a long way to go, but Tavern Tales is definitely a step in the right direction.