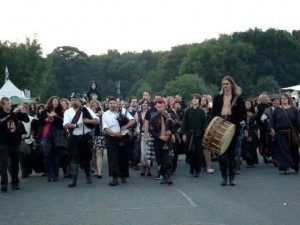 The MPS spectacle is saying farewell to Weeze. When you visit the MPS only there, it seems odd, a lot of people, a lot of fun, why quit? But the answer to this is an easy, visit one of the other MPS festivals and you’ll notice the Middle Ages and the airport are not the most suitable combination.

But the masterminds of the MPS are going to transform the ‘Weeze edition’ into another event based on fantasy and steampunk, and that’s a brilliant idea.
But back to this years edition, no less then 4 days of Medieval life, bands, food, knights, daily life, joy and mead! The first and only disappointment for me, I’m only able to visit the festival on Saturday and I have to miss Cumulo Nimbus, Nachtgeschrei, Ignis Fatuu, Tanzwut and Vogelfrey on friday, what a shame. But I’m glad I can make it on Saturday. The weather is very good, dry and sunny, great for a festival. All dressed up visitors are a feast for my eyes, and that are only the visitors, they contribute a lot to the spectacular atmosphere of this event.
You can empty your wallets at all stands, to buy a medieval wallet for instance or a nice medieval bag, to put all your stuff in. Because MPS is cheap, despite the fact all jewellery, clothes, shoes, belts, swords and a lot more are handmade, the prices are really good. A nice way to spend some money to enjoy the Medieval times when you get home, or expand your outfit for the next festival.
You can take some rest and drink a nice beer, of even better mead, they sell it in every taste you desire. And while you can spend many hours here, the best way is to stay the whole day, you can treat your stomach on a lot of Medieval-kind of food. You can’t find French fries or burgers anywhere at the large festival grounds, but you won’t miss them at all.

And in between all these nice thing, or when you want, while your eating and drinking, you can enjoy a lot of music. We listen to ‘Duivelspack’ during a fighting show of the knights of Fictim. We saw a piece of ‘Pampatut’, very nice medieval music, but too much talking in my opinion, so we went on to see the thriving drums of Saor Patrol. The band which is the living sign board for Duncarron Medieval Village in Scotland. After this the evening starts and we’re going to watch the Dutch band Omnia, which will entertain a large crowd with their pagan folk. The band has added a guitar-player to their line-up, which is a very good decision, it give their music a lot more strength. Great show, and compliments for Steve who managed to learn German very well this year, which enabled him to carry out their message to the Germans as well.

After this show, we moved on to the evening show of the sympathetic Dutch folkers Rapalje. With their mix of Irish, Scottish and Dutch folk they’re very popular in Germany, despite their language. Their talks are quite entertaining when you understand German, English and Dutch. The four musicians have a background of street musicians, they perform in the folk-spirit, to entertain the people. This evening show is almost cabaret. Ideas seem to fall out of the blue sky and are put into practice instantly. This time they have decided it would be nice to play on a bench. Some helping hands take a bench from the audience and put it on stage, they easily fit it into their show and play a few songs while sitting on this bench. Until Gisi (the fabulous organizer of the MPS) visits on the stage on his round through the area. The guys spot him, make a quick remark in Dutch and out goes the bank, and they play on if nothing had happened. And we get entertained with a lot of funny stuff like christmassongs, songs with changed lyrics and a lot more. Very nice and very entertaining performance.

Since you can only watch one band at the time, we had to skip Faun this evening en after Rapalje we went on to the eveningconcert of Saltatio Mortis. They had to play during the game of Germany at the WK soccer. They had made a promise earlier this day and they confirmed this before they started, they would stop with every goal in this game immediatelly, and applaud of cry about it. And then they would go on exactly where they stopped. And so they did, the concert took off and we got some nice songs, until ‘Le Corsaire’ where Germany obviously scored. They immediately stopped and after they had a little time celebrating the goal they went on with the last part of the song. Fortunatelly the second goal came in between two songs, but what great skills these guys have.

They make fun, they tease each other with their music, make fun out of each other, give us musical jokes, but all with great skill and always entertaining. Even when they stop in ‘Eulenspiegel’ for another goal and manage to start again on the second count in the refrain, you you can only think: “What skills!”, and so funny. Like a medieval Hans Liberg they put down a show which makes you laugh, enjoy, get shivers down your spine, dance, move, you get totally entertained.

Then we have to go home, you can stay the night in the camping-area, but we don’t. Nostalgia comes over me, only when I’m walking back to my car. I miss the MPS already and I can only be glad the tour isn’t over yet and there will be more festivals this year. For me the next time will be Borken, near the Dutch border with again bands like Omnia, Rapalje and Saltatio Mortis and many more.