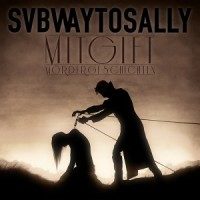 We had to wait a while for a new Subway to Sally studio-album, but here it is. Mitgift, with the subtitle ‘Mördergeschichte’, the subtitle isn’t in vain, this album is about death. We saw the German band taking the path to darker stories over the last years. Their previous album Schwarz im Schwarz sounded darker, maybe Mitgift is a little lighter, but where the lyrics are concerned this last one is the darkest of them all.
The album starts with this nice StS choir, damn they’re good in this. The band has a very nice spectrum of voices, which sound awesome together. This first one is about death right away, and has this nice solid thriving rhythm which we know from their previous album.
The second story starts with some medieval sounds, and we hope we can get this sounds from the past back a bit more in the music, but unfortunately this isn’t the fact. But there is no real reason to complain, because it’s a nice song about a man, who refuses to accept his partner is dead. We still hope Bodenski and his partners put some more medieval elements in their music, like we know from their first albums, but that’s only from a Folk-metal.nl point of view. Their music might be slightly different compared with the first albums, it has become much darker and lacks a lot of medieval influences, but it’s still very nice.

Despite the fact there’s just as much blood in Mitgift as their is in Subway to Sally nr. 1 hit ‘Julia und die Räuber’, this is a totally different band. The music is stripped of the medieval elements mostly, the lyrics have become much darker. And from a Folk-metal.nl point of view this isn’t good, but as a fan of Subway to Sally it still sounds very nice to me. The band has taken us along at their journey and I hope they manage to introduce some more folk-influences in their music in the next albums. But this album is nonetheless very, very nice.