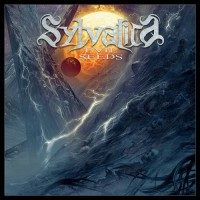 The idea for the Danish band Sylvatica was born while they were listening to Svartsot. And this is one of the influences which can be heard on the album. Jardén isn’t as low as Svartsots voice, but it’s nice, low and dark. No grunt with Sylvatica, but just this fierce Viking-voice giving the music its fierce power. Backed up by two guitars their music gains an enormous power with which they go into battle.
In songs like Hate Quest are the most obvious Svartsot influences, but one of the big differences is the lack of flutes or other typical folk-instruments.
Most of the compositions are mainly Melodic Death, and we can conclude the songs on Evil Seeds are very strong, making this a very nice album to listen to. But on the other-hand it’s nowhere the folk-metal like we like it in bands like Eluveitie. The folk is just a marginal element of Sylvatica’s music. And of course this isn’t bad, it only makes it a little less interesting for the pure folk-fans. The fans of Melodic Death will like Sylvatica and will take the lack of folk for granted, because it’s ever so nice, to listen to this fierce sound.