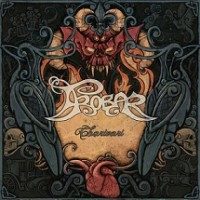 Trobar released an EP in 2011, but ‘Charivari’ is the first full lenght album made by this Folk/prog band from Quebec.
As you might expect from a band of this part of Canada, they sing in French, but the good news is…. No, that’s a joke of course. The language fits their music well. Fortunately they don’t only use the keys for the folk-elements, but flutes as well.
The keys are doing a decent job, setting the atmosphere like in the intro L’Aube de Tous les Diables. Despite the fact the music is loud, but clean the voice of singer Éric Albert is nice and raw, giving the sound of Trobar a nice raw edge. The title-track Charivari has this nice flute, which doesn’t only give it a nice folk-feel, but is also a very nice contrast with the low and dark vocals. And there’s another little pearl in their music, although it’s heard rarely. In the nice tracks like Le Sacrifice and Noctambule, the female voice of Pascale can be heard shortly, this sounds nice too. She has a perfect voice to add to this music now and then, Trobar shouldn’t hesitate to introduce her voice some more.
But there are other nice elements in their music as well. Listen to songs like Tyran and you can hear some Jethro Tull-like influences.

This nice mix of prog, folk and other elements makes Trobar so nice. Charivari is a very enjoyable album, with good songs, nice music an a good use of the flutes and other folk-elements. It was quite a pleasant surprise to listen to a band I’d never heard of with such a nice album. They have set out a path of their own and although it’s never very shocking renewing, they have created a nice sound of their own. Definitely worth listening to.