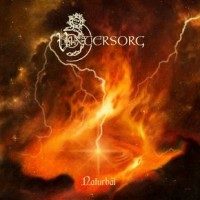 If there is one band that releases quality albums in a rapid pace, it is Vintersorg. In 2011 a series of four albums was announced with the four elements as the theme. ‘Jordpuls’ was the first of the series, which revolved around the element earth, shortly followed by the album ‘Orkan’ with the theme of air in 2012. ‘Naturbål’ is now the third album in the series and literally means ‘bonfire of nature’ when translated. It is obvious that this album fully revolves around the element of fire.
Since the founding of the band back in 1994, Vintersorg has made quite an interesting musical evolution. What began as a pagan/black metal initiative quickly grew into a more progressive sound. In 2007 however, the band went back to its roots with ‘Solens Rotter’, but the progressive influences can still be heard up to this day. So is the case with the new album Naturbål, which offers a wide range of musical influences. The beautiful Swedish lyrics are interspersed between raw black metal screams and softer passages in which the fantastic clean vocals really stand out. In addition, these clean vocals are being assisted by female vocals on the opening track ‘Ur Aska Och Sot’ and ‘Rymdens Brinnander Öar’. On the third track of the album ‘En Blixt Från Klar Himmel’, the violence really explodes. Cold, raw black metal vocals interspersed with beautiful clean vocals and solid guitar work creates a wonderful contrast in the music. The song isn’t called ‘a thunderbolt at clear sky’ for nothing. It is noteworthy that the band is increasingly dependant on the guitars, pushing the orchestral elements to the background. Because of this the progressive elements are more noticeable, as is the case in the song ‘Lågornas Rov’, in which black and folk influences are subtly supported by a more progressive sound. This musical diversity and balance between the genres is exactly why Naturbål has become such a great album. Vintersorg is able to create a folk-like sound without the use of traditional folkloristic instruments as done by many other bands before them. The strength of Vintersorg is in the diversity of the genres and the characteristic clean vocals which make for a great variation between the songs. The songs blend into each other seamlessly and all sound equally unique. The album might not have any real highlights, but the sound that is so typical for Vintersorg is once again fully present.

As the third album in a series of concept albums, Naturbål has become a wonderfully varied album that will appeal to seasoned fans and new fans alike. The album is varied enough to captivate just about anyone. Don’t let this album pass you by, listen and let yourself be carried away by this wonderful musical journey that is called Vintersorg!