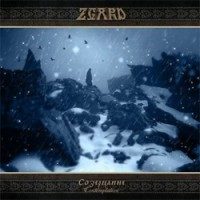 Quantity above quality is sadly a motto that a lot of bands hopelessly seem to cling to. Artists release new albums at breakneck speed, which does not always benefit the quality of the music. Luckily there are artists who know how to combine these two factors. This is also the case with the Ukrainian solo-project Zgard.

That the music of Zgard cannot be captured in one genre is obvious. Following the album ‘Astral Glow’ which was released in 2013, Contemplation sounds a lot darker and more emphasis is placed on the atmospheric black side rather than the pagan side of the music. The themes that can constantly be found in the lyrics, however, are pagan mysticism and Carpathian legends and myths. Carpathian folklore therefore has a clear influence on the album. Although the focus of the album is atmospheric black metal the whole sounds very diverse, and the vocals are varied between black metal screams and clean vocals. Although the black vocals sound fairly hollow, the whole is still quite manageable. The screaming black metal riffs are finely interspersed with acoustic interludes, in which many folkloristic instruments such as the flute and (jew)harp are used. The many tempo changes are buried under a thick layer of synthesizers, which occasionally make the album sound a bit chaotic and messy. In addition, the mix of instruments does not seem to be optimal. However, this does not spoil the fun in any way. It is clear that the latest album by Zgard is a small masterpiece all by itself. The album may not always sound smooth and supple, but this is music that you should FEEL. Fear, misery and sadness, but also a sense of peace and serenity are feelings, which can be traced from the music and are perfectly fused into one perfect whole. Where the song ‘Highlands’ gives me a feeling of fear and desolation, the song ‘Underworld Bells’ evokes a sound of sadness and sorrow, which changes into a different mood somewhere halfway through the song by clever use of piano and flute parts. The instrumental song ‘Silence’ is reminiscent of a cold winter day because of the ‘icy drop’ sounds produced by the keyboard, but somehow this song still manages to give me a warm feeling. Truly beautiful.

The album might not be equally smooth, but the whole sounds incredibly nice. I will take the vocals for granted, because it is still black metal no matter how you look at it. The overall impression that the album leaves behind is a positive one, and in terms of music Contemplation is put together remarkably well. Although I would have liked the music to be a little more ‘exciting’ every now and then there is little wrong with this fourth studio album by Zgard. The mix of instruments could have been better in my opinion, but put that aside and just enjoy listening!