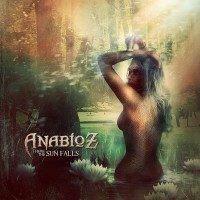 Anabioz, isn’t a brand new band, they started way back in 2003. But this doesn’t mean they produced a large collections of albums, a demo in their first year and two albums, one in 2008 and one in 2010. But I can say I was very excited when they announced they were planning on a new album. Their style of solid Death metal is blended with a very large dose of folk. The music filled to the limit with violin. Only when Olga is singing with her nice high, bit classical, voice, she stops playing the violin. Add the nice raw low male vocals to this and you have an awesome folk-metal mix. So bring it on this new album…
This new album was postponed quite a while and if really suffered a lot of delay. But when I’m listening to this, I can only conclude this hadn’t a bad influence on the quality. This album is so nice to listen to.
They cultivated their sound even more, almost to perfection. This is one of the best albums I’ve heard this year. I recently reviewed the album of Protokult, and this is a band they can meet with. Anabioz wins this clash of titans because of their compositions. The songs on There the Sun Falls are very nice, they already got me with the first song When Death is Watching Me, and they go on like this. The songs are all ripe and ready to be picked, if this is due to the long delay of the release, I can only say Hurray!
With a lot of catchy songs, like Dance, Dance, a song with delicious folk-elements. Most of them quite speedy, but they have quieter ones like Under the Alien Sky as well. Or they do both like in Put’ Vo T’me, which has this nice resting point in the middle to take of from there with brute force.
Lyrics in English and Russian so the fans who are worried they won’t understand a thing they’re singing, won’t have a problem. For me this isn’t an important thing, and both languages sounds very nice when Anabioz uses them.

Sound Age Productions has made a great catch with Anabioz. They’re really a fine folk-metalband, and with ‘There the Sun Falls’ they have made one of the best folk-metalalbums of this year. With this album Anabioz proves they can meet up with the ‘big ones’, excellent music, superb vocals with lots of folk, definitely an album you should buy, when you like lots of folk, violin and the combination of male and female vocals.