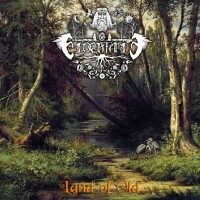 Eldertale is a folk metal band from Ukraine consisting of Kirya Shapovalenko (vocals, guitars), Eugene Belozertsev (guitars), Eugene Kozakov (bass), Josh O.Berg (keyboards) and Alexander Desyatnichenko (drums).
Although they just released their first EP, the roots of Eldertale go way back. The concept for Eldertale was alreay on Eugene Belozertsev’s mind in 1998. In that time he was still playing in his other band named Tiara. In 2004 he found his bandmate, Kirill “Kirya” Shapovalenko, and shaped the Eldertale project for real. Due to many professional and personal issues, the duo turned this project on hold until Eugene Kozakov joins as bass player in 2007. Eldertale returns on hold in 2008 for the same reasons until late 2012, the arrival of Josh O.Berg and Alexander Desyatnichenko. The line-up was complete then. Eldertale became a mix of heavy metal, power metal and death metal influenced by traditional Slavic folk music.
Eldertale worked hard for their debut EP entitled “Land of Old” released online by June 2014. Now, the band is currently working on their debut album.

It’s difficult not to hear that Eldertale is heavily influenced by Ensiferum. (especially the older work of Ensiferum)
Nonetheless, the EP sounds really professional and interesting. You can hear that the musicians are experienced and have played in bands before. It makes me curious for more, and if they are to release their debut album I would buy this! But I hope that by the time they will release it, they have added some of their own style, something that makes them unique, maybe some more Slavic influences. If they will do this, Eldertale could become a surprisingly big folk metal band who would fit in well with the other bands on festivals like Paganfest or Heidenfest. After all, I would like to see something new playing there!