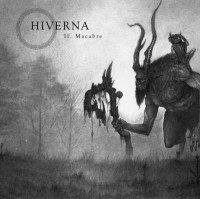 Hiverna is a Canadian Folk Black Metal band from Québec that was established by Bardunor, a black metal musician who is active in several musical projects. After a split-album that was released in 2008 the band released its debut album ‘I. Folklore’ in 2010. Now four years later, the Canadian band releases its second studio album called ‘II. Macabre’.

The name Hiverna, which literally means ‘wintered’, is very representative for the music that the band makes. The atmospheric passages that are interspersed with the raw black metal vocals and softer instrumental interludes give a feeling of a cold wind blowing over a winter landscape. However, it is not solely the black metal aspect that the band is focusing on. Unlike Folklore, Macabre focuses slightly more on the folk elements of the music. This can be heard in the first track of the album ‘Tous morts, tous pourris’ that opens with a violin intro, the song ‘Âges’ that features a bagpipe and the flute parts that have become a critical part of the music in general. These instrumental interspersions offer a nice variation between the songs, and make the music more accessible to a diverse audience. Fast guitar riffs are being interspersed with softer melodic passages and blast beats every here and there, and acoustic parts are easily integrated into the music through the many changes in tempo. The fast guitar riffs carry a big part of the raw black metal elements of the music. This sound is enhanced by the vocals, that vary between grim grunts and heartbreaking black metal screams. Although Macabre puts the focus more on the folk elements, the black metal background is still the clear focus of the band. In terms of genre the band is hard to describe, as halfway through the album the music seems to be getting a more Pagan-like sound, which is enhanced by the sound of the flute that plays a prominent role in the music. In the song ‘À toi, Venin des Songes’ these flute parts stand out wonderfully and really seem to predominate on the album. Nature and Folklore are two returning themes on the new album, and the lyrics are all-in French, which contributes well to the eerie sound of the band.

Although the music might not be entirely original and the riffs sound a little standard every no wand then, Hiverna still knows how to create a sound of their own, making Macabre a very diverse black metal albums with trips to other genres such as pagan, folk and melodic (death) metal. The whole sounds incredibly grim and dark, but still manages to be surprisingly diverse through the use of traditional folkloric instruments and softer acoustic intermezzos. This album will appeal to both seasoned black metal fans and fans of raw pagan metal alike. Definitely a recommendation!