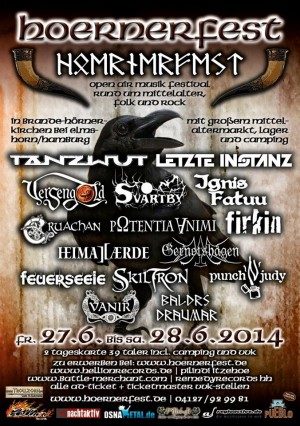 Photography by: Toni B. Gunner – www.mondkringel-photography.de

It has become some sort of tradition, the last weekend of June is, as every year, reserved for the best festival of the summer.
Somewhere in a small town just passed Hamburg. As every year this small festival forms the missing link between metal festivals and the known MPS like events. With a stage full of folkrock and folkmetal acts and a big medieval market complete with shisha stand and homemade liquor, this festival has a unique sphere.

Friday
Vanir
No time to wake up on Thursday, because the first band that entered the stage was the Danish Vanir. The sound wasn’t perfect yet; the lows were a bit too prominent in the mix, which resulted in the music becoming a bit of a noisy blur from time to time. Besides that, the band played very enthusiastic and convincing. Although some of the members were a bit static on stage, it was clear to see they were enjoying their time and that they played with passion. The mix between brutal, heavy and pounding metal mixed with bagpipes worked wonderwell and this resulted in the first people banging their heads.

Skiltron
A year ago we’ve seen these Argentinians in our own café and they weren’t even close to what they are on CD. This year the men are on Hörnerfest this year and might try again. But just when we are walking to the stage, the singer is so off, we decided we’d better spend our time on the market.

Heimataerde
Love it or hate it, that’s Heimataerde, for the people who haven’t heard from them before. The ultimate combination between In Extremo and Combichrist, like I said, you love it or you hate it. Sometimes in even remembers me of Blutengel or Traumtaenzer. So it’s the black sheep on this folkmetal festival. A band in crusader armor with cyber music. On stage a man with a sword and an axe adds nothing at all to the performance. Such a shame the flutes were so over rulled by the synthesizer. It all was awesome accept for that, but it’s something crucial!

Svartby
It’s time for one of my personal favorites in this years line-up. The Russian band Svartby arrives to destroy everything near the stage with there violent and ultra happy folk metal.
The keyboards could’ve been some louder, but in a setlist with all their bizar party songs to ensure enough moshing and headbanging, Svartby does everything right. And when Svartby is gonna play their new song Karls Egg Farm, I can’t become more happy! Svartby meets every expectations and more! A show to guarantee a chaotic party!

We skip Potentia Anemi to take some time to enjoy the great roll with meat that is sold here every year. In a true German way they serve you a dull little roll with a lump of meat that falls out on every side! We get a glass of mead and smoke a water pipe, Hörnerfest is complete.

Versengold
You know what you can expect from Versengold beforehand. This acoustic, medieval company is always good for a party. Acoustic guitars, accompanied with these typical German vocals and traditional instruments; Germans love it. This was clear to see, because a lot of people gathered in front of the stage to watch them. Everyone sang along with the catchy songs, and basically everyone clapped and danced along. Damn right, because this band definitely knows how to create a party!

Tanzwut
Tonights last act is Tanzwut, a big name in the German folkrock scene. I have high expectations of them and due to there fame and status I think I’m allowed to have them.
Tanzwut however had other plans tonight and after a few empty songs in which I can only wander if the singer can actually sing, we decide to head back to our tents. The complete lack of enthusiasm plays a big role in our decision as well. If you guys don’t wanna play, than please don’t bother to come. Tanzwut really disapointed me.

Saturday
Baldrs Draumar
The first act on the early saturday morning is the Frisian (a province in the North of The Netherlands) Baldrs Draumar. Personally I hadn’t expected so many people to show up for a not German act so early this day. The Frisians kick of with brutal noise and though they have some technical problems with the bassguitar that even has to play on a cable in stead of wireless, the set is great and they give away an amazing show! Sjoerd shows that he’s a great frontman and he even gets the crowd going, at 12 in the midday! And when they start to play songs like Hels Krav and Slangen Forgifter den Utkledde, I can’t be more happy. During the song Eala Freya Fresena, it becomes clear how deep these men love their own Friesland. I thought it remarkable that the famous songs Hod og Mistelteinen and Hva Faen weren’t played, but that doesn’t make the show any less. I’d honestly say that this was one of the best two bands during the festival!

Gernotshagen
Gernotshagen was there for the lovers of something more brutal. Paganmetal to be exact. Dressed in traditional outfits this band was surely convincing to see. Powerful paganblack, ideal for headbanging. The band was enthusiastic, although they made some mistakes because of that. Also, it seemed that vocalist Askan had some help with his clean vocals, by means of a backing tape. Besides that, the show wasn’t bad, though I’ve seen them playing better many times before.

Ignis Fatuu
And another band of which it would be better if they’d never be booked on Hörnerfest again. Although the Germans love it, I seem to miss the point. I simply love some of their songs on CD, but live they only seem to disappoint. It was the same at the gig they played at Hörnerfest. The vocals (especially the female) were often slightly off tune, and also the rest of the instruments were on the edge of dissonance. Too bad, because on CD they’re pretty fine.

Cruachan
the Irish Cruachan, a band I wanted to see for a long, long time. It may not sounds that amazing if after 21 years in business, they accomplish to be one of the last bands on a small German festival, but that doesn’t say anything about the fact that Cruachan has written some amazing music over the years!
It all starts great for the Irishmen. But in the past the band had a female vocalist too, so somewhere in the set you would want to play some of these songs. For this problem, Cruachan has a solution. They have contests every now and than and the price is to sing with them on stage. Unfortunately Cruachan would better have skipped this songs this time. Classics like Pagan and Ride On were completely ruined and this way I would have preferred not to have heard them. I was happy when after a few songs this part was over and these Irish warlords could continue their fight in full strength. I am Warrior was the ultimate highlight of the set!
All together a great show, a shame of the female vocals.