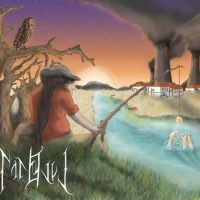 From the ashes of Viatora, a new name arises. Crawling from the obscure caverns of the Dutch folk-metal scene arrives the fall of the darkness, as all light quenches, Nachtval.
After the song Banneling made it’s way to the internet a while ago, the band will profile themselves with a new demo.
This demo starts with an intro of course. Grim and dark is the musical sphere they grant us. Music that clearly originated from Thijs (ex-viatora). After one and a half minute they turn on the instruments and not much later it’s time for the first song of this demo.
Banneling, the song we already knew, but they re-recorded and mixed it.
The song is less based on the troll sounding violins and is more supported by keyboards. Than the howling brakes loose, a dark poem is told about a banished man who fights for his freedom. The lyrics are all in Dutch which say
“No man shall kill me.
No man shall be my ruler.
No man shall crown me.
My fate is now mine.”

the grim sound of the progressive blackmetal with the trollsounding violins mix into a sinister sound that with the bombastic keyboards forms some sort of black magic that rests as a curse over the listener and forces you to listen this album to the end.

De Onderlanden, an battle song from the caverns of the halls of marl and torch enlightened lands. Once more showing the strong musicianship of these guys. With the same kind of mix Nachtval creates a new, unique sound that can only be described as themselves. The Dutch lyrics give a filthy effect in a way we only know from the Swedish lyrics. I had no idea my mother tongue could sound this nasty and grim.

Nachtval, the titlesong is the last song from this demo. It sounds more joyful than it’s predecessor but now less sinister. And suddenly, a drinking song? It sounds almost like it, and it’s definitely dance-able. But the lyrics are a prologue on death itself.
“The gates open up.
The end of time.
The gates open up.
For he who rides without banners.”
And thus the banished one dies, but not before a funny inside joke for those who knew Viatora. The tune of there famous song “Trollig” is played in Nachtval style to finish the demo with.