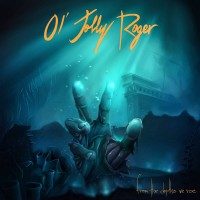 When you start to listen to this first release of Ol’ Jolly Roger, you immediately think of Alestorm. It’s very obvious where these guys got their inspiration from. ‘Mead’ is a very good composition this track, despite I doubt it, if the word ‘composition’ is used with honour in Pirate metal. Pirate metal is more about simple feast and trashing the place. Let’s say this song has a lot of fun and would do very nicely at a concert.
They take Revenge at the world in the second track, because the vocals in this one are bad. And I don’t mean bad, as in a mean bad pirate…
The third track is again a nice Alestorm-like pirate-metal track, which is rather fun to listen to. No news on the horizon, but it’s fresh. But mean like real pirates the band likes to torture us with the fourth track ‘Adamaster’. Because I don’t want to be that cruel, I won’t spend more words on this.
Black Flag is one of their first songs and this is a proper one, despite of the poor vocals.
In the end Ol’ Jolly Roger has added a practical joke to this release, an 8bit version of Crack Jenny’s Teacup, reminds me of the days people actually had to listen to this ‘magnificent sound’ while playing a game.

I’ll take it this release is a demo, to show the world what Ol’ Jolly Roger is capable off. The recordings aren’t the very best ones, but for a demo of a starting band they’re nice enough. These young and enthusiastic Pirates sail the rough seas, would they have sailed still waters, their music wouldn’t be that fun probably. But they could have looked into the calm water and look at themselves in the reflection. While doing such, they would have realised Revenge, Adamaster and CJt 8bit version, shouldn’t be on a demo, where you want to show the world your best.
Mead, Crack Jenny’s Teacup and Adamaster are nice songs, as a demo that’s not much, but enough. Would it only have been these three tracks, they would have scored a higher rating, I would even forgive them for the vocals. It’s very obvious they admire Alestorm and it’s tempting to make things larger than the original. They’ve showed to me, they have the potential to create something nice. And I honestly believe they can create a party when they’re playing live. But I do hope they develop in a slightly different way, it’s a bit too much like Alestorm like this.