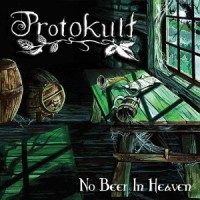 Protokult is not a Canadian folk-metalband like we’re used to, in fact they’re nothing like we’re used to. Their multicultural background is the base for their very broad sound. The main elements of their music, are the solid guitars, and the vocals. These vocals contain a broad-ranged male voice, grunts, metalscreams and clear and a very beautiful female, suitable for the clean singing classical parts and the more Slavic vocals.
And indeed when you think of bands like Kivimetsän Druidi and Crimfall, you’re in the right direction. That is, in a lot of songs, because it has to be said, Protokult is more diverse.
You’ll get a complete display of their beautiful vocals in ‘My Father’s Word’. Martin manages to produce the nicest grunt, but Martin has a lot more up his sleeve for us, in this track he’s prepared to show it all. And the way Ekaterina joins him in this, wow, no more to add to that, just wow…
In songs like Sanctuaries and Desert Scourge, she has an almost middle-eastern voice, an just as beautiful.
When you’re going to give Protokult a try, and I think you definitely should. You’ll probably think with the first notes: ‘Oh no, another Korpiklaani-like band’. But you don’t even get the chance to turn it off, a couple of notes later Ekaterina joins in with her beautiful voice and it all get it’s own sound. It’s obvious her roots are in the Slavic tradition.
It’s not all folk-metal in Protokult, Heaven Cast Me Out isn’t a bad song at all, but it’s much more in the direction of bands like Nightwish. But it has to be said, it’s just as nice and despite the fact it sounds different is fits in.
And while both great vocalist are weltering us in this bath of voices, the rest of the band is comforting us with great music. The album is filled with nice compositions, brought by skilled musicians, which support the vocals with melodic tunes when needed. But the they don’t fear to use progressive force to make their point. To add a little folk to the instruments, recorders are used. And this is a delicious mix.
After ten regular tracks there are two hidden tracks on the album, my only comment on these two are, they’re not ‘hidden enough’ for me.

But let’s forget these last two tracks, that leaves us with a superb album. Protokult gives folk-metal a new nice dimension. Their progressive folk-metal approach is a very delicious one. Don’t let the ‘beer-titles’ fool you, the band goals are far beyond beer-humpaa. They’re far more serious, despite of the sometimes quite merry tunes.
This is one of the best folk-metal albums I’ve heard this year!