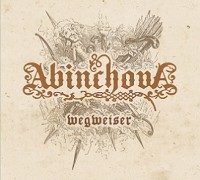 Abinchova is a folk metal band from Switzerland with 7 band members. Abinchova was founded in 2009, they released their first EP ‘Hörensagen’ then. In 2011 they released their first full length album ‘Versteckte Pfade’. Their third production was the EP ‘Handgeschrieben’ and in July of this year ‘Wegwieser’ was released, their second full length album.
When you think of a folk metal band from Switzerland, consisting of 7 band members, you probably think about Eluveitie.
Abinchova definitely sounds different from Eluveitie. The only way these 2 bands are connected is by Anna Murphy of Eluveitie who recorded some of the violin and keyboard parts and has sung some of the female vocals. When you read it like this, it seems like she had quite some influence on the album. Which is not bad at all, because the album sounds very professional and is very easy listening.
You can hear a big variety on the album. The intro starts calm with a speaking voice accompanied by guitar. The voice sounds a bit ‘trollish’ which immediately feels like I am listening to a folk metal album, so it’s sets the tone of the album very well. After this calm 1 minute intro, the guitars are bursting out of your speakers, with songs like “Unter der Erde” and “Wandlung”, powerful songs nicely blended with the sound of the violin. You can hear the violin in almost every song but always more on the background. I think this gives Abinchova their own sound. All songs blend very well with each other, I think this album is not bad at all. And it sounds like a progression compared tot heir first album. I’m curious what else this band is going to bring us!