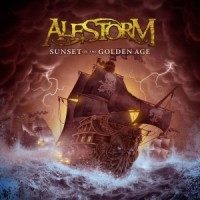 Whoever thinks about pirate metal will undoubtedly think of Alestorm. These guys who made their debut in 2008 with ‘Captain Morgan’s Revenge’, with their catchy songs about pirates, plunder and mutiny, really promoted the genre of pirate metal. And although there are a large number of contemporary bands that fall within the genre, Alestorm is still on top in terms of pirate metal. After the mediocre album ‘Back Through Time’ that was released in 2011, I was afraid that the band was already on its way back, but with the release of ‘Sunset on the Golden Age’ it becomes clear that pirate metal is far from being extinct.

The album kicks off with a typical Alestorm song, no lengthy intros or other fuss, but immediately a strong dose of pirate metal. ‘Walk the Plank’ is a great opener and really sets the tone for the rest of the album. In terms of lyrics it is safe to say that we should not expect any masterpiece from Alestorm, but in terms of music this song is pretty decent. As expected from Alestorm we are being treated to a sing-along pretty early on the album, and the first song smoothly flows into the second song on the album called ‘Drink’. This clever trick is something that many bands continue to do well; set the tone for the record in the first couple of songs, place the lesser songs halfway through the album and close the album with a solid track. The third song on the album called ‘Magnetic North’ sounds surprisingly fresh and original for Alestorm terms, and is slightly less upbeat than the usual songs from the band, but catchy nonetheless. The highlight of the album, however, is the song ‘1741 (The Battle of Cartagena)’, which begins with a chiptune intro and then bursts into a haze of heavy guitars and solid drum work. This song reminds me of the aforementioned album ‘Captain Morgan’s Revenge’ and that’s definitely a positive thing. With ‘Mead From Hell’ the band has once again written an enormous crowd-pleaser, because there’s no way you can sit still on this track. The same applies to the following song called ‘Surf Squid Warfare’ which is a perfect party song. As mentioned before, every album features a couple of songs that may be slightly less than the rest in terms of quality. So is the case with ‘Quest for Ships’ and ‘Wooden Leg’, in which the first song provides a fine variety on the album, but ‘Wooden Leg’ completely misses its mark. I can imagine that this song gets more fun as more alcohol is consumed, but this song deserves no place on this album in my opinion. Luckily the Taio-Cruz cover of ‘Hangover’ rights this failure almost instantly. I must confess that I already find the Alestorm version a lot more fun than the original, and this is definitely a song that would do good live. With ‘Sunset on the Golden Age’, the band has made ​​a fitting conclusion to the album, because the eleven-minute-long track has everything we expect from Alestorm; fast guitar riffs combined with a healthy dose of keytar and a great overall structure.

With Sunset On the Golden Age Alestorm scores above expectations and we are finally transported back to the roots of the band. Of course the music remains much the same, but that’s the charm of the band. For a fourth full-length, this has become a very solid album that holds more surprises than you would expect in advance. In addition, it is clear that the band has evolved in terms of music. Donot let this record pass you by, “set the course to Cartagena, history is written today!”