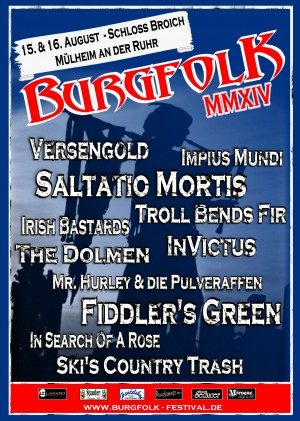 The Castle ‘Schloss Broich’ is invaded by a large crowd, is it going to fall? Yes, it is, Schloss Broich is falling in the hands of Folk!
Don’t worry this will be no harm at all. It’s given back after two days of ultimate fun, to be invaded next year again. This year was the 14th time this event took place and this small festival is simply great.

The atmospere is cozy, you seem to be among a lot of friends here and there always a lot of nice bands. This year we had to skip the friday, but we were relieved we could make it on saturday. As a fan of folk, you simply can’t efford to miss this festival.

Young and old and everyone in between gather here for this festival to have fun.

Impius Mundi
The festival starts with the Medieval Rock-band Impius Mundi. This is the toughest job you can get, starting a festival. Most of the time we see rather shy bands start playing and take a shy look at their audience from time to time. Not Impius Mundi, they occupied the stage and grabbed the audience to take them along in the feast they had in mind. And this worked out perfectly. It’s not very crowded at the start, but these guys don’t seem to care. They came to have fun, and to take the audience with them, so they did. With great pleasure they took the audience with them on a trip with them with nice songs like In Taverna, Diese Nacht, All Voll and Last dein leib am Galgen Hängen, and like they have the guts to stand up and face the audience from the start they have to guts to bring a brand new song as well Am Ende as well. The fact the band lacks a great singer doesn’t bother me a bit. They have no less then four members who have a decent voice. With ‘the real stuff’ like violin and bagpipe, they manage to take everyone with them and put down a hell of an opener on this Burgfolk saturday.
Score 8/10

Irish Bastards
Then we get these Irish Bastard, which aren’t from Ireland by the way, but from Hamburg. And if this was a game they might beat the previous one with their skills, but they failed on grabbing the audience. Accordeonplayer Detlef did a fine job, but they can be really proud of their Canadian violinplayer Ian Mardon, every time this great little fellow took the lead part with his violin he managed to get the audience really excited. They did a fine job, with a lot of nice songs, if they could manage to grab the audience this would have been a hell of a gig. But all in all it was a pleasure to listen to these guys.
Score 7/10

Ski’s Country Trash
When the third band started, the weather screwed up the festival a bit, it started to rain, but this didn’t seem to scare of many people. This Country Trash band of singer Ski, who’s also know from his band Beloved Enemy, brought a great show, in which the heart of Johny Cash, seemed still be pounding. These guy, and let’s not forget bass-player Lea Randella, skillfully worked the audience, and got great response for that.
I seemed to be the only one missing the folk-connection in this. A great band for a festival, but for me not at Burgfolk.

The Dolmen
Then it’s time to leave Germany. Well, not quite, you don’t want to leave this nice location. But the next band brings of Pirate and Celtic Folkrock from the UK. And it was a pleasant surprise, I knew about the band, but they surprised me in a very pleasant way today. With quite a strong sound and a very nice show these symphatic band managed to get the audience going. Cat Love helped them out on the violin and did a very fine job with this.
This band can put up a great show.
Score: 8/10

Troll Bends Fir
In Germany it always seems a bit harder for the ‘non-German speaking’ foreign bands. Where the German fans are doing easily whatever a bands asks from them, this always seem a bit of a problem with the foreign bands. The Russian of Troll Bends Fir surely had a problem to build a bridge over this language-gab. These big Russian trolls spread their nicest songs over the audience, but the residents of Schloss Broich reacted somewhat cold. The very enthusiastic Maria ‘Jetra’ which did an awesome job with her very nice vocals and her awesome Irish Whistles, put on a great show. She seems to be the weird heart of this Russian trollband. Frontman Konstatin ‘Troll’ did his best to get the audience going, but didn’t alway get the maximum result at this. Probably the music of these band isn’t known well enough by the audience, because the finest Troll Bends Fir songs like Hoplnir, Brothers in Drinks should get much more response from the audience. Konstatin works hard for this he even gets of the stage to show the audience what they should do in Catch a Salmon! and this works. With Konstatin as motor they start this nice cross-over of a circle pit and the polonaise.
Score: 7/10

Invictus
Well, Invictus. I was very curious about this band. What were they up to. The main members of this band were formerly known as Schelmish, and played a nice kind of medieval rock, with lots of bagpipes and shawm. They put an end to this band, but after a while they decided to start a new band. I was hoping this band would have medieval elements somehow and while they were at the Burgfolk line-up and at a prominent place, my expectations were high.
The band started with 6 Schelmish songs, this sounded OK, although they had picked 6 of the Schelmish rocksongs, derived of all medieval instruments. The only shawm which was at stage could hardly be heard. Well no folk of medieval sounds so far. But when the band changed their shirts after these 6 songs, it became worse. They played a kind of electro/rock shit with stereotype gestures, which couldn’t make me happy. Moderate music for a completely different scene, with crappy vocals. After one track we decided to sit down and take a rest, so did a lot of people in the audience. The people who stayed started talking, which reduced the audience to a row of 5 or 6. The scheduled time was filled with a lot of smalltalk, which fits the cozy medieval scene, but was annoying now.
Score 0/10

Fiddler’s Green
ut fortunatelly this Burgfolk edition hadn’t came to an end, we still had one band to go and we got Fiddler’s Green for no less then 90 minutes! This band has worked it’s way up through the line-up during the years. And it couldn’t be more suitable for them: The Headlining Band. After they had played and conquered Wacken earlier this year and ‘did’ Lowlands in the Netherlands only the night before it’s was now Müllheim a/d Ruhr’s turn to party with these guys. What a hit they have become with their so called speedfolk they grab the audience and drag them into the party. They had cut the show in three parts roughly, in between were two nice restrained pieces. The second one was evolving in a great drum and violin act, wow, just great! How can a band be this spectacular without throwing flames and stuff!
I shall not kick in an open door by writing down the songs they played. Think of all the very best FG songs and put them behind eacht other. Worth mentioning is althought that there are quite a number of songs of the last album which fit in this great setlist. Thit says a lot about their latest album Winners and Boozers which is one of the finest albums I have ever heard. According to Fiddler’s Green, you can only say: We want more, because ‘The More the Merrier’!
9/10