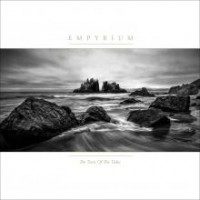 Damn, what did we need to wait for a long time! 12 years to be precise, because previous record ‘Weiland’ was released back in 2002. Nevertheless it never became completely quiet all these years, because lately the project from Schwadorf stated they would start performing again. This resulted in the magisterial ‘Into the Pantheon’, in my opinion one of the best live-registrations ever made. During these concerts, a few new songs were played live already, but here it is. After waiting for 12 years, ‘The Turn of the Tides’, a completely new full-length Empryium-album, is finally there!

And just to be clear from the start; it was worth the wait. This album is everything you might expect from an Empyrium-album, and that’s quite a lot. To describe the musical style proved to be difficult; because how do you describe music that is so set on moods and atmosphere? Empyrium created with ‘The Turn of the Tides’ above all an album that is vivacious. From the first piano-notes from the song ‘Saviour’ to the last, slow notes of the almost dreamy ‘The Turn of the Tides’ you will be hooked. It’s hard to point out a set genre for this album, Empyrium is unique in what they do. It contains traces of many different genres, but not enough to classify them as such.
Variation is key on this record. Empyrium shows that, with limited orchestration, they can be epic and compelling, in comparison to songs where they sound modest, even timid. And these differences can be found within the songs as well. Although all songs sound totally different, there is one aspect that makes everything sound like Empyrium. Every song is covered in… How would you call it? Melancholy? It’s pretty hard to describe it exactly.
Empyrium shows that they’re more relevant than ever. Releasing a great album after 12 years is not something every band can do. The band captures the true Empyrium-sound and atmosphere, and innovates and improves on that. Definitely recommended for people who like music that’s different than everything out there. No easy-listening music, that’s for sure, but definitely worth to check out.