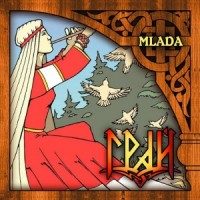 Grai has signed with Noizgate Records and this enables the band to release their third full length album ‘Mlada’, wich means something like Beautiful young girl. We have said it before, Grai is one of Russians finest folk-metalbands. They went on further down the path they took earlier. The band sounds as Russian as possible, but they make it accessible for the rest of the world. Each and every melody is dripping of Russian folklore, and besides the fact the lyrics are in Russian, their singer Irina has this typical Slavic voice. And I love it. To me, folk-metal is at its best when the metal contains a high percentage of folk.
Grai has left the dark coverart of their first album behind and like the corn on the second one, this one has a simple drawing of a typical ‘Mlada’ playing a flute. This album is very complete. Where some of us are longing for the nostalgia of a vinyl album which has a large cover. Grai shows us a CD can be just as nice. Of course the coverart is smaller, but the band brings the CD in a nice carton box with drawings and has put a miniposter with a bandpic on one side and the Russian lyrics on the other side in it. But that’s not all, there also a booklet with the English lyrics. Thank you Grai, for taking care of all fans all over the world!
The album starts with Beard, with solid guitars and the nice flutes of Aliya, a funny song about the things which can happen to you with a beard. After a nice up-tempo track with good hunting advice, we get to Mlada, the title-track of this album. This is one of the songs in which the band shows us their fine songwriting skills. The song is very pleasant to listen too, the flutes in this one are so beautiful and plays such nice lines. And lets not forget the polyphony vocals in this track, because they are ever so nice! I’m very pleased to hear these kind of authentic instruments again, in a song like Hay Harvest we get flutes, Jew’s harp and bagpipe, I love it!
But besides the more powerful songs there are more restrained songs like I Will Sow My Sorrow, a song in which Irina lovely voice takes you away. This beautiful slow track is followed by Fortress, another beautiful compositions in which the band describes the enchanting lovelyness, but also the strength of a fortress.
After the Outro there are two nice musical surprises wrapped as two bonuses In the Arms of Mara, a beautiful sensitive song with nice violin by guest musician Ilmira and the funny ‘flutefull’ track Fish.

Very nice to hear, Grai has become stronger again. With this third album they have grown a bit again. Mlada is simply a very strong album. Maybe not for the ‘scream-loving’ metalheads, but for the fans of good decent solid metal with a lot of (Russian) folk in it, this album is simply great!