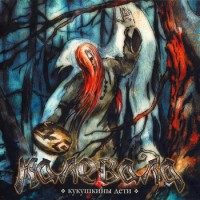 Kalevala released their album Kukushkiny Deti a few years ago in 2009, but the band has signed with Sound Age Productions and the album is released again through this label. In 2009 I didn’t knew Kalevala, so this re-release is a perfect time to give this album a short closer look.

This album is Kalevala at it’s best, just like in their 2013 album ‘Luna I Grosh’, nice folk-metal and folk-rock with delicious Slavic influences. Singer Ksenia has a Finnish heritage, which can be heard occasionally. Kalevala compositions are pretty clean, no grunts, no growls, no screaming guitars, just clean guitars and clean singing. But with a voice like (ex-Butterfly Temple) singer Ksenia this is no problem. The only down-side of this, is it sounds a bit too neat and tidy from time to time. But the main part of the songs sounds very nice. With great catchy songs, where you want to improve you Russian language, so you can sing along, like in Gorsti Talogo Snega.
“Oy-oy-oy-oy, – vremenem – ne vremenem,
To letet’ nam lebedem – ne lebedem!
Oy-oy-oy-oy, – da belokrylym v nebo vzmyt’ –
Chto ne dognat’!”

Delicious! Don’t you want to speak Russian after hearing this? But these folk-anthems are not the only bright sides of this album, the very nice accordion is another great thing, it brings in the folk, freshly harvested.

Kukushkiny Deti is clearly one of the best Kalevala albums, no wonder Sound Age Productions decided to re-release this album. In this way it’s made possible for all the fans all over the world to purchase such a nice album. A perfect album for the fans of clean folk-metal.