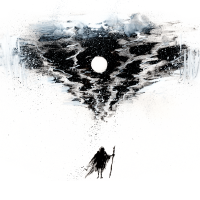 Not even 3 years after ‘The Void’, the debut record from Oak Pantheon, was released, the band already thought it was time for a re-release. Although the album was only available digitally in 2011, the band has chosen to release the album in a physical way as well this time.
Due to the new production and remastering, the music sounds better than ever before. The beautiful melodies, the acoustic, atmospheric passages and the harsher, more paganblack-like pieces sound close to perfect. The vocals sound a bit sharp or contrasting with the rest of the music, but this is just a matter of getting used to.
The question that always rises with a re-release is if this release actually adds something to the complete work of the band. Although it’s nice that the band finally releases this album on a physical CD, it doesn’t add much music-wise. Everything sounds just a little bit better, a bit more refined, but in 3 years’ time, not much has changed. Nonetheless, this CD is a perfect way to acknowledge you with Oak Pantheon. So are you a fan of paganblack, played with a sense of melody and musicality, and where acoustic passages are present within the music? Then definitely make sure to check out this band!