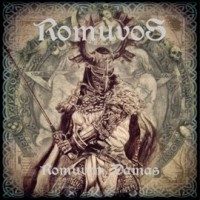 One man, one epic sound
Romuvan Dainas is the debut folk metal album from one man band, Romuvos. Velnias is the man behind the band, who was born in Lithuania and took on this personal project with great success. The album features 8 enchanting tracks, entrenched with melodies and incredible vocals that strike hard through deep and powerful tones.
The opening track ‘Under the glaciers of Baltijos’ really tends to set up the album, showing a much cleaner sound than most folk metal projects. The ability to create such epic sounds through simple acoustic guitars and calming instrumental chains is a work of art, and personally I feel the calmer sound is inviting. Velnias has really captured the true spirit of folk metal by using simple instruments and sounds to create something with such epic feeling.
The opening acoustic passage on ‘Poems for the dead’ is a slight change of sound from the first three tracks, and evokes a fantastic feeling when the lead guitar and drums burst into the song. Such a catchy riff that sticks with you throughout the song, with less use of the accordion as seen in other songs, it really allows the guitar to shine. My personal favourite from the album, this song really dictates the strong sense of song writing that is portrayed in this album.
A range of instruments have been used throughout this album, and all through simple riffs and such a calm tone that is incredibly peaceful to listen to. The final song on the album, the 8 minute track ‘Romuvos Dainas’ is the only track that does not contain English lyrics, and instead Velnias’ Lithuanian language. Once again, the heart of this album is worked through the harmonies mixed with such strong vocals. The amazing feeling that each song brings is enough to keep you listening, and hoping for more songs in the near future.
Romuvos has surged onto the folk metal scene in style, bringing a new format of epic-pagan metal with progressive style. If the song writing Velnias possesses is filled with this much talent now, there are only positive signs to come. I don’t think it will be long before we see more art from this man of talent, and I will be one of the first to buy a copy.
This album is looking to drop on the 30th of August 2014 through No Colours Records, a solid piece that will leave you shocked at first, but keep you interested for long enough until you fall in love with it. A fantastic debut album, and a decent 8.5 out of 10 from me.