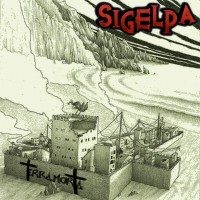 Terramorta is the debut of the Spanish Celtic Punkband Sigelpa. We noticed before the folk-metal in Spain has it’s own style, but the same goes for the Celtic punk on this peninsula. The music of Sigelpa is more like Brutus’ Daughters, The Fatty Farmers and 13Krauss, then it’s like Fiddler’s Green or Flogging Molly.
They introduce a lot more punk in their music. And another nice element which we can hear in Sigelpa as well, is the combination of male en female vocals. Besides this they use hardcore in their musical mix. Personally I’m not that fond of this style and this is at once, something I dislike a bit in their music. But the rest of it, is quite OK.
The violin is the main instrument responsible for the folky style of their music, but you can hear accordion as well and this gives it a nice sound too. These authentic instrument give the music some spice. While the vocals put in the anger, like it belongs in punk, where the lyrics are mostly about the downside of society.
This albums has nog less then 14 tracks, almost all pretty decent ones. Listening to this album it only lacks songs with a ‘wow-factor’, ‘L’atac dels Ultrapirates Pecadors’ is one, but I can image there are other songs which do it better live. We notice this more often in Celtic Punk bands, it’s real ‘live music’, best enjoyed with a pint of bear and loose legs.

But overall this is a decent debut by Sigelpa, I would travel half of Europe to see them, but when I’m in their neighbourhood, of when they are in mine, I would surely like to see them.
Nice folk-influenced punk in Spanish, worth listening too.