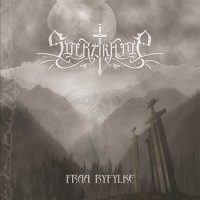 The Norge folk-influenced Pagan Black Metal band Sverdkamp started in 2010, but they thought it would be a nice to take things one step further and they released a demo. A limited edition of this EP ‘Fraa Ryfylke’ can be purchased at their bandcamp.
There are no folk-influences worth mentioning in the first track Til Strid, but the second track Daudens Drikkleikarvise, isn’t only very catchy, but has a nice folk-touch.
They lyrics have pagan theme’s but they are probably very proud at their homeland Norway as well, at least their Hymne til Heimlandet sounds like it. 🙂
After this Black Metal picks up the pace again in the track Trettemyrane, despite this, it’s a nice track. And they get my special compliments for the beautiful vocals in the refrain, very beautiful.
Med Vondt Ska Vondt Fordrivast is the last track, in which the Pagan Black Metal is again in the spotlight, with it’s raging guitars the raw metal screams.

Sverdkamp has passed it’s examn with Fraa Ryfylke, I’m not to fond of this raw kind of Pagan Black metal, but the two tracks with more folk-influences and the very beautiful vocals in the Trettemyrane refrain, make this album even for me nice to listen to. The sound can be done better, but this is something we won’t take in account since this is a demo, probably made with a low budget. Nice work! Let’s hear some more!