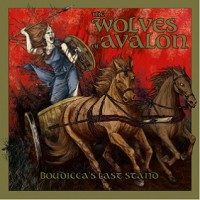 Are you familiar with the history and legend of the Briton queen Boudicca, who defied the Roman empire when Roman Legionnaires raped, murdered and ravaged her tribe? Well, prepare to be educated about a time where there was no Wales, Scotland or England, when pagan lore ruled the wild lands of the Briton and Roman legionnaires tried to civilize the last of the wild clans of the island of the wild through untellable crimes against the native folk…
Several artists of other folk and pagan metal bands cooperated with each other for this second piece of art, and a piece of art it has become indeed. History, folk and pagan influences blended with metal and lore of old, describe a dark era of history. A waltz of revolution, war and peace, ever continuing on their own accord. Music makes one relive the time of Boudicca either think about the consequences of certain actions and following counteractions. Within this album Rome depicts the dark, the fear, the evil, as Boudicca depicts the sadness, the mother and the warrior she-wolf. The usurper versus the victim, and as Rome had learned before: some victims do not fall without a notable fight…
Have you got what it takes to challenge the might of Rome?