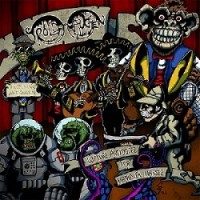 Oopz, they hit it again!
most a mission impossible) but they have also made one of the best albums of 2014.
Do you think you can make such a thing yourself? Don’t try this at home, you can’t possibly copy this madness. Believe I tried it myself, I put Trolls, Monty Python, an orchestra, a soundtrack and a slice of Trollfest in a blender, but it didn’t work out. It’s obvious all these ingredients have to be hand over to a bunch of maniacal mastermind musicians. Then everything will be alright.

Troldhaugen starts these Anekdotez with a Table of Contents, what else should you start with…
Immediately after this the Trolls roll on with an lecture on the Hunting Tactics For Mythical Creatures. The blunt trolls start to caress their instruments. You have to get used to this, but clear your head and absorb this trollish brew and you’ll like it soon.
What’s wrong with this album? Well, Trolhaugen waits to warn us in the fourth track to Buckle Up!. You should definitely do this before you start to listen, because Troldhaugen is taken you on an unbelievable rollercoaster-ride, taking you to impossible dimensions and far beyond you imagination. When your brains aren’t secured before the start, you’ll find them scattered throughout the room at the end of this album.

For anyone who isn’t buying this album at once, I can only say: YOU ZHOULD DEFINITELY LIZTEN TO THIS ALBUM! At least try this, because it’s again a masterpiece by Troldhaugen.