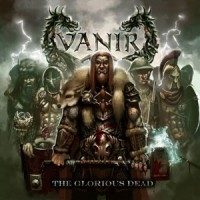 With the upcoming release of their third album, it seems Vanir are continuing on their path to severe brutality.
The album titled ‘The Glorious Dead’ entails 9 tracks with enough power to blow your speakers before they reach eleven, and is one not recommended for the faint of heart.
Since the release of their debut album ‘Særimners Kød’ in 2009, Vanir have continued to experience a slight change in sound.
This instalment, although continuing with its ‘folk’ based riffs, and lyrics inspired by Viking mythology, has taken a more powerful approach which rids the album of beloved chants and any clean vocal passages.
The heavy nature of the album is experienced from the onset with the opening track ‘Fall of the Eagle’ which lays out a monstrous riff, whilst hiding the much appraised folk melodies.
Vanir’s previous sound was led by bagpipes and keyboards harmonising with the lead guitar, but with more focus on the guitar, this has created a much more forceful sound, and changes the atmosphere of the album.
Although fans may find this disappointing, the roaring vocals do justice as they surge with aggression, and are accompanied by strong riffs that would give any heavy metal fan the urge to jump into a circle pit.
The folk element still has its place in the album, and is more prominent on tracks such as ‘March of the Giants’, and ‘Written in Blood.’
The fifth track, ‘I Valkyriernes Skød’ is the slowest song on the album, but such aggression allows the song to embrace any listener. This is the only track with non-English vocals, fortunately it doesn’t affect the fabric of the song and is a personal favourite from the release.
It is apparent throughout the album that a choice was made to push the folk instruments into the background and allow the guitar to be the sole part of the music, leading to a fuller sound, but one older fans may not embrace.
Whilst the album lacks any anthems, or chant based choruses that fans can scream in a crowd with a beer in their hands, the change will definitely bring in a new fanbase with ‘Lamb of God’ style riffs, and vocals that will please any death metal fan.
The album finishes strongly, specifically through ‘God Emperor’, a pure metal track based around a fast paced guitar riff and dark vocal work, a song that you would hope to see on any live set list.
Overall the album is in a tale of two minds, a record that may leave fans behind and missing what was, but at the same time will invite many new fans to the start of what could be.

‘The Glorious Dead’ whilst coming with a surprise on first listen, will grow on you until you play it so loud it damages your speakers.