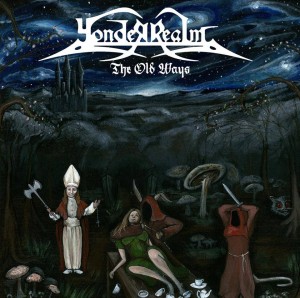 Another severely overlooked band, Yonder Realm has finally compiled a proper full length to delve into and lose yourself in with The Old Ways. It has been too long a wait since the Beyond A Long Lost World EP from 2011 which promised a bright future on the next release.
The Old Ways thankfully delivers on that promise. In the scheme of things they remind me of an American version of Ensiferum (Finland)or thrashier folkier versions of Winterfylleth (England) and Cnoc An Tursa (Scotland), somewhat surprising since they reside just outside of New York City so you may wonder where those killer folk touches comes from. It doesn’t really matter as long as the product delivers and this does.
The songwriting does not seem as linear as the above mentioned bands with lots of breakdown parts and layered instrumentation, showing numerous influences in the process. Production wise this is spot on, with a perfect blend of grit and subtle tonality. Plenty of tasty riffs with a dash of folk instrumentation are the magic ingredients for Yonder Realm and I am huge fan of it because at the end of the day I want metal with some folk flavour and not the other way around. Vocalist/guitarist Jesse McGunnigle balances between groove master and lead howling, proving adept at both while trading fiery guitar licks with fellow axe slinger Jorge Dominguez, who does not shy away from unleashing some amazing solos. Bass player Eddie Carella and drummer Johnny Gierak lay down the proper amount of ferocity, tempo changes and low end without getting lost in the mix or showing off (previous drummer Scott Burgess left earlier this year so I am presuming he does not appear on the album). Keyboardist and violinist Dana Lengel really is the differentiating factor here with soulful contributions in every song, completing already great compositions with perfect touches of keys and strings adding to the triumphant feeling of the songs. Tim Read (of the almighty Trollgasm) also contributes some mandolin to further the folk fest along. “Sacrifice To The Stone Gods” opens the album with a dosage of keys and thrash while setting the pace for the rest of the songs.
All of the tracks here need to be listened to so don’t make the mistake of just listening to someone’s favourites because they said so…. but if I had to choose my favourites they would include “Crows” and “The Pillars Of Creation” not only musically but lyrically. So make sure you get the words so you can sing along and really appreciate these songs for what they are…heroic, epic tales remembering times long ago and longing for a return to The Old Ways, a perfect title for one of my favourite albums of the year.