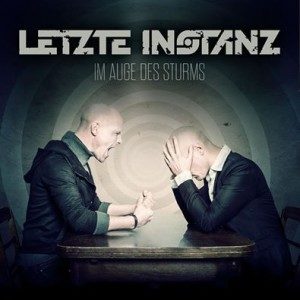 The eleventh studio album. You can say what you want, but not that Letzte Instanz likes to take it easy. These folk-rockers, who have quite a reputation in the Gothic scene, release with ‘Im Auge des Sturms’ an album which is filled with songs with that classical ‘Letzte Instanz-sound’.
But what is this typical sound then? Saying they are one of the many mittelalter folk-rock band would be too much. Letzte Instanz is a bit sharper, the music has more rough edges than their well-known colleagues. The violin and the cello are used to intertwine beautiful melodies, which gives the music a slight melancholic undertone.
There is just one remark that needs to be made; there are no exceptional good songs on this release. The overall quality of the songs is just fine, just none of them is really memorable. The songs pass you by without keeping your attention. Sometimes, the attention is drawn by interesting melodies or tempo-changes. However, this is mainly the case when the speed increases.
All in all a decent record from Letzte Instanz. Fans can immediately add at least one point to the overall score, and they can see this record as a must buy. However, for people who are not really into this band, or aren’t into German rock in general, it might be better to leave this release be.