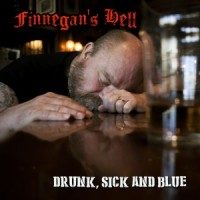 A Hell of a record, this ‘Drunk, Sick And Blue’. When you start listening to this second piece of work of these Swedish Celtic Punkers, you get blown away by their music at once. Starting with the very nice speedy title-track of this album, you get very fine music at once. Speed, happiness, banjo, accordion, folk, punk, you name it, it’s all in there. On this album you’ll find a mix of songs, written by themselves and notorious folksong like Jar of Porter and The Molly Maquires.
So far a nice album which would be a nice way to get drunk with.
But, yes unfortunately there are two ‘but’ as well. The first is originality, when I listen to ‘Wanted: Drunk ‘n’ Alive’ by The Royal Spuds, it sounds quite the same. A different singer, that’s obvious, but the rest quite alike, a song like The Molly Maquires which is on both albums, isn’t the only similarity.
But is really making me blue, is the fact we like to hear lot’s of this nice music, but despite the fact this album is announced as a full length, there are only a meagre 23 minutes of music on this album. Way to short, and it would surely have gained more point when it would last a lot longer.

Despite the fact, there are other bands, making almost exactly the same music, this is a great release. But there may be 10 songs on this album, it isn’t a full length by far. This might be no problem when you’re listening to it digitally, but when you’re planning on buying a CD, it is something you should realize.