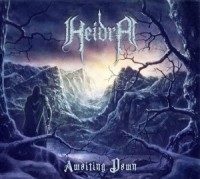 The Danish group Heidra released their debut EP ‘Sworn to Vengeance” in 2012.
The folk metal band’s EP heralded a promising future for a full length album. “Awaiting Dawn” only needed the first few notes to convince me that it could fulfil this promise. And it only got better from there.

The first track ‘Prelude’ starts mellow and reminds me of film music such as the Lord of the Rings soundtrack. The epic and melodic sounds of the second track ‘Awaiting dawn’ will surely get your head nodding. The Danish gents are really elevating themselves with these opening tracks, setting the bar high for what’s to come next.
The following track ‘Betrayal’ starts with a beautiful intro of melodic death metal mixed with black metal and a hint of folk. The powerful vocals of lead singer Morten Bryld are the glue in this solid sound, making ‘Betrayal’ my favourite piece yet.
With “Awaiting Dawn” Heidra proves that it’s impossible to place their sound under one category. The album is a beautiful mix of different styles and sounds. For example, ‘Witch of Prophecy’ feels like power metal possibly due to the style of singing. Unfortunately, the operatic sounds are not my cup of tea and therefore it’s my least favourite song on the album. ‘Into cursed lands’ takes a whole different direction and, for me, improves things considerably. Lyrics about battles, swords and invasions add to the interesting folk/Viking sound. Another folk gem and personal favourite is ‘Wolfborn’ which is reminiscent of the early work of Finntroll.