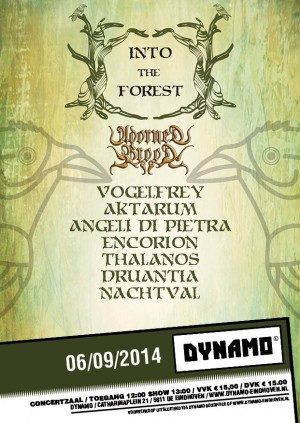 Finally, a small folk-metal event with an super awesome line-up full of young, talented bands that’s not 7 hours away from here. Indeed, this year The Netherlands have one of these amazing festivals too, Into the Forest is it’s name. In the city Eindhoven 8 young bands full of talent as well Dutch as foreign. Unfortunately I have to miss the first few names, unless I really wanted to go early.

Druantia
Fortunately I was right on time to see the very last show of our own Druantia. The band is playing with more enthusiasm than ever and is determined to give everything they’ve got for one last time. Even though it’s early on the day, these young Brabanders get the crowd going. A big part of this crowd are friends of the band who all came together one last time to party with a band we all knew and loved. Druantia, thank you guys for all the amazing gigs I had the privilege to be. You will be missed!
About this day, the party had started!

Encorion
Encorion, I may not be the most objective person when it comes to this band, but honestly, this is the best Dutch band! Regardless the genre of period I dare to tell you, honestly, that of all Dutch music I know, Encorion is the very best. As we are getting used to with these Paganmetalheads, the sound is wonderful. The mix of there violent pagan metal with a nice and sometimes even fragile violin sound., if it isn’t mixed perfectly, it’s getting really painful. Today, just like always, the sound is perfect. With old songs like Raging Storm, just as songs from their latest record including Burried in our Lands and Our Pagan Hearts Reborn, you just know it’s gonna be a great show. Especially when their big hit Spirits we are One is played. The crowd is not as cheerful as they where with the spectacle before, but that doesn’t bother me. The stiff stage performance on the one hand is very stable and well performed, but on the other hand it’s the slight downside of the show too, sometimes you miss the enthusiasm.

Angeli di Pietra
The first foreign act is the Belgian Angeli di Pietra, who give a special 10 year jubilieum show at Into the Forest. Special about this show is that they brought not only there current vocalist, but also their first vocalist Jan. The show itself was good and so was their sound. On stage our southern neighbours knew their ways, giving a great and dynamic show. With their folk/power metal these Belgians fell a little bit out of tone, but with enough folk they just fitted within todays line-up. But non the less the band didn’t seem to reach every attender. Everything was just good, but that was the biggest downside too, it wasn’t special. Non the less I was very happy to finally scrape this guys from my list of bands I wanted to see but never had.

Aktarum
More Belgians, this time the Walloon Aktarum, Trollmetal in flesh and blood. For years I yearn to see this band live on stage and finally there is a possibility for me to see these trolls. This year they brought out their new EP “Game of Trolls” and it is for this occasion they play this EP entirely. Fortunately there still is enough time in their 45minute setlist for some classics like Imperial Troll and Fight to Death (when I’m not utterly mistaken) and gods be praised I even got to hear the legendary Rock ‘n’ Troll! My day was perfect already. In an wonderful show with perfect sound, no-one should cross path with these filthy trolls and come out alive. I’m already looking forward to next time!

Vogelfrey
One of the highlights of the evening was definitely Vogelfrey. The German sextet has travelled all the way from Hamburg to Dynamo to treat the audience in Eindhoven to a healthy dose of German folk metal. Earlier in 2013, the band had a gig in a crowded Hall of Fame in Tilburg, and today the band also attracts a lot of audience to flock to Eindhoven to admire the band on stage. This is also the case today, because the venue is well packed when the band starts playing. As is expected of Vogelfrey, we are being treated to a great show with a lot of humor and idiocy, ranging from a bleeding Barbie head during ‘Feenfleisch’ to the violinist in a rabbit thong during the final song of the set. In addition, the cheerful folk metal tunes ensure for a wildly enthusiastic audience, who fanatically move to the music time and time again. Vogelfrey is one of those bands that you can continue to see without the shows getting boring, and this was definitely one of the better shows that I’ve seen from the band up until now.