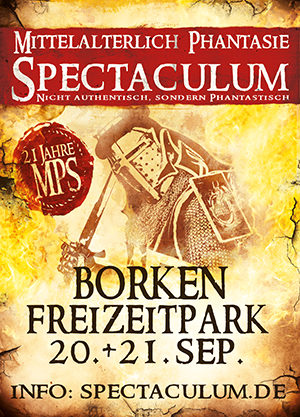 When the mist vanishes the encampment of our allies appears at the borders of the Bocholter AA, ‘home at last’ I think and I’m heading towards the bridge to get reunited with this friendly army. It’s time to let this modern times behind at the side of the river and step into the Middle-ages at the other side. And when you’re prepared to take this final step, you’re charmed with the nice Irish folk-sound of Rapalje. The MPS has grow a little this year in Borken, they are no less then three stages,

where during the whole day, nice bands are showing their skills. In a cozy environment bands like Rapalje and Mr. Hurley und die Pulveraffen are entertaining the folk with their music throughout the day. And when you can resist the urge to dance at songs like Rapalje’s ‘The Queen of Argyll’, you can walk along many stands with nice merchandise, jewelry, cloths, armory, you name it. And don’t forget we’re in the Middle-ages, so everything you see is in style. Well, that means, you can let your fantasy free today. This isn’t a historical event but a fantasy event, so don’t take this middle-ages to seriously, this is all about the good life. Get you stomach filled with mead and meat, fill up your ears with music. This is all in the name of Folk, as we can hear with the very nice Medieval folkband Versengold, which are entertaining the public until it starts to rain on this beautiful afternoon and then…. They keep on entertaining, the audience doesn’t mind the rain and keeps on dancing in front of the stage.
The MPS has made some adjustments this year, keeping the problems with muddy places on their area kept to a minimum. Great job, this makes this festival even nicer.

Music
In our case the music is one of the main reasons to visit this festival, so we’ve have a tight schedule for the evening, because we like to visit a complete concert of Rapalje, unfortunately they are a bit messy at the beginning of this evening, but they are always nice to see. After this we visit Omnia, which left me with mixed feelings. ‘Etrezomp-ni kelted’ and many other Omnia tracks are such nice songs, they touch your very soul. But songs like Noodle the Poodle and Dance until we Die don’t work for me. Unfortunately they played them once again, just like a number of songs of their latest album, which are derived of Omnia’s lovely folk-sound. But what about the audience? They loved it, a large crowd was clapping and cheering along.

Saltatio Mortis
‘What more could go wrong’ Lasterbalk said during one of his talks in between the songs. But there wasn’t anything we could hear in the audience, except for one thing of course. Alea took a nasty fall of the stage in one of the first songs. But again we got an example of the perfect organisation of this event. After Alea climbed back on the stage a bit startled, the band played on. Alea grabbed the microphone again and sang as if nothing had happened. Professional help was already on stage and with one hand in bandage the show went on as if nothing was happened. And with songs like Promotheus, Veitstanz and many more the audience was entertained to the max, so when SaMo ended after 90 minutes with Eulenspiegel, the crowd kept on singing and singing… and singing. Until they came back to treat us on another 30 minutes of high energy Medieval rock. They performed a nice medieval version of Wild und Frei, but all things come to an end. And after 2 hours of the very best medieval songs it was time to drink some mead with the band at Tom’s Drachenschenke.

A beautiful day came to an end and we have to cross the river again and get back to the modern world, but what’s so great in this time travel to the MPS, is you can take a little piece of it with you. With some nice merchandise we can get through the coming months. And back home, enjoying my mead, I’m grab the calendar and fill in the dates of the MPS events next year…