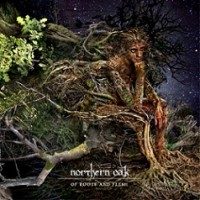 It doesn’t happen often, especially not in the folk-metalscene; an album that is financed entirely with a kickstarter. Before the recording of the album started, Northern Oak asked their fans to pledge a certain amount of money, to pay for the recordings. Of Roots and Flesh, the 5th studio-album from these guys and girl from the UK, is the proof that the kickstarter succeeded.
So, the kickstarter succeeded, but will this release be a success as well? I need to answer this with a ‘yes’, although I’m not fully convinced. The band plays a certain kind of ‘progressive folk metal’, and this is the first aspect where it goes wrong. The folk-metal of Northern Oak is the one of the most standard kind. This doesn’t have to be a problem, although some originality can’t be found on this release. Folk-metal with a lead role for flute and violin, which reminds me a lot of the band Krampus. The pacing is quite high, and all the songs are energetic, although the flute enriches the music with some sort of serene calmness.
Although the members play pretty well, the production isn’t optimal. The sound is quite ‘flat’ and the flute is a bit too loud.
‘Of Roots and Flesh’ is a bit of a meaningless release. Decent, but certainly not more than that.