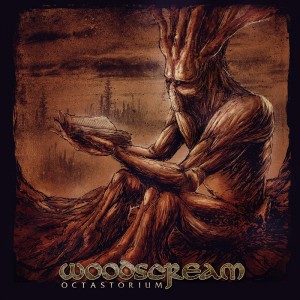 The Russian equivalent of Eluveitie. So, here’s a very blunt statement for you, of course much to blunt. But to give you an idea what Woodscream is about, it’s a good one. Russia has quite a lot folk-metalbands and a lot of them use Slavic folk-elements. Woodscream had more the Celtic kinds of folk in it. The band is female fronted and uses a lot of violin and flutes.
The main vocals in Woodscream are the clear female ones, but in some songs like Toṕ they get assistance form low dark male grunts.
The comparison with Eluveitie has it’s climax with ‘An Dro’, a famous Eluveitie song, which isn’t an song written by Eluveitie but an old Breton folk song. But by putting this on an album, a band is eager to appeal to the fans of music like Eluveitie makes it.
In the following track Kovaĺ (Blacksmith) the band shows they’re capable to write these kind of nice songs themselves.

Woodscream isn’t a copy-cat of Eluveitie, it’s a band with a different sound, but fans the Swiss heroes, will probably like Woodscream as well. Their music has a lot of Celtic influences and they have created a very nice album with ‘Octastorium’. Does this album have a downside? Yes, with 35 minutes it’s rather short, two more song would be highly appreciated, because listening to this album is a very pleasant thing to do.