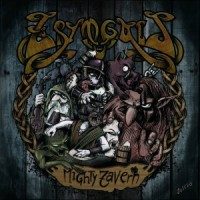 Zrymgöll signs with PRV, this will probably mean there will be physical copies of their latest album ‘Mighty Tavern’, which was released last December. But this isn’t the only remarkable fact. We know half of the songs of this album already. When you don’t know this Argentinian band, you shouldn’t jump to conclusions to quick. Zrymgöll released an acoustic EP last year as well. This album surprised me in a very nice way and I’m still of the opinion ‘Brotherhood of Folk’ earned every single point of this album which received a very high rating at Folk-metal.nl. Eight points is very nice. The choice to release an acoustic album first was remarkable, but a nice one.
Now we get these songs and seven more on their first full length.
The music is very nice, funny, sometimes trollish, sometimes in a beer-folk-metal style like in tracks like Beer Head, with lots of accordion, violin and flute. Which makes the music bursting out with folk, like in Mr. Folk for instance.
The only downside are the vocals sometimes, there are some a bit forced at some moments. But because this music is at it’s best consumed at a party, this doesn’t bother too much.
The songs are all quite nice and pleasant too listen too, they cheer you up, when you’re down. And the band deserves a big compliment for the nice work they did in re-writing the songs for an acoustic performance on the previous album. It pleases me to hear what a nice job they did with both versions of these songs.

Zrymgöll creates great music, and when they are in your neighbourhood, and this will probably be somewhere in South-America, and you feel like having a party…
This band shows this kind of funny somewhat alcoholic folk-metal can be very nice indeed. And they deserve to be played at every party. The fans of the old Korpiklaani songs will surely like this and should definitely buy this album. But everyone who likes a large dose of folk in their metal should listen to this as well. Great!