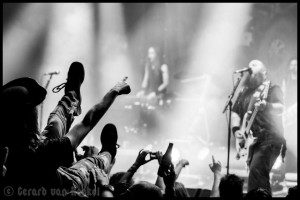 Alestorm is hot. And although this band is one of the main examples of ‘you love it or hate it’, it seems this band is here to stay. With their 4th album released almost two months ago, Alestorm was ready to plunder Europe. A tour with Troldhaugen (finally!), Crimson Shadows (We missed them unfortunately…) and Brainstorm (standard Powermetal) could only mean it promised to be a great success. That many thought the same way was clear by the many sold out shows, and Dynamo, Eindhoven, was one of them.

Troldhaugen
As early as fifteen minutes past six the first hints of music were blasted through the speakers of Dynamo. No, not metal, but some kind of ridiculus popsong was wat could be heard. A few seconds later, 4 guys, dressed in Hawaiian outfits with flowernecklaces came running onto the stage. The 30 minutes that followed was, in short, a bizarre spectacle. The members of Troldhaugen ran, jumped, danced and crawled over the stage, which was an… Interesting sight to say at least. The audience enjoyed it and clapped along during every song. The setlist consisted of songs from every release of Troldhaugen, with as an absolute highlight their cover of ABBA’s ‘Gimme Gimme Gimme’. Although the overall sound was a bit messy, the enthusiasm of the band members made up for that. One thing’s for sure, this band deserves to be back in Europe one day!
Score: 8/10

Alestorm
Because we missed Crimson Shadows, and since Brainstorm isn’t folk-metal, we immediately continue with Alestorm. That this band became incredibly popular was easy to conclude if you looked at the many people standing in front of the stage, waiting for this band. The venue was completely packed when the band started with ‘Walk the Plank’, a song of their latest release. During the night, many songs of the new ‘Sunset on the Golden Age’ came by, like ‘Drink’ and the epic ‘1741 (Battle of Cartagena). Old classics, however, weren’t forgotten with songs like ‘The Huntmaster’, ‘Wenches and Mead’ and of course ‘Nancy the Tavern Wench’ which was sang along by the whole audience. Although this was the last night of the tour, the band played with a lot of energy and clearly seemed to enjoy it.

With the usual nonsense in between, like a staring contest between guitarist Dani and bassist Gazz, and of course Nico the talking (and during ‘Midget Saw’ singing) monkey hand puppet this was one of the better shows I’ve seen of the band. After this concert there’s only one conclusion which could be drawn, and that is that Alestorm is here to stay. Top performance where the band showed that, besides their musical capabilities, they still don’t take themselves too seriously.
Score: 9/10