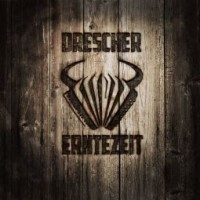 Well, now… something completely different, the Austrian band Drescher. Knowing this is their debut, then you will be rather amazed by the output of this band. This album sounds very good for a first one. The band has a style of their own, and it’s quite difficult to describe it.
The Melodic and Trash are clear, but I couldn’t find any folk in it. Of course, they use an accordion, in a way which sounds a bit like Finsterforst, but that’s it.
The band describes their music themselves as hard volksmusik, the translation of google to folk-music isn’t quite right. Listening to this from a folk-perspective, I don’t think this album is very interesting. It isn’t a bad one, but I can’t get enthusiastic when I’m listening to it. Besides the Finsterforst kind of accordion, the music sounds a bit like the early work of In Extremo, but derived of all folk and medieval elements. What remains is nice hard rock with accordion.

When you go for the folk in the music, you can skip this album in my opinion. When you’re in for a band with a new sound, then you should give it a try.