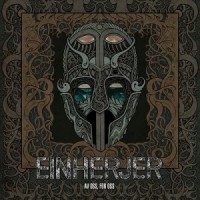 In 1993 a group of lonely warriors from the historical Haugesund came together. These Einherjer, as they are called, want to show the world the culture in which they have grown up. Barely a few kilometres away from the site where, according to the legends, king Harald Fairhair of Norway was buried, a new generation of Viking-metal came into being.
With their unique mix of Viking-black metal and new wave influences these Norsemen tour around the world for years. These men stood through the darkest hours of the Norse blackmetal-scene, making clear they want nothing to do with Satanism. Now with Av Oss, For Oss it’s time for their sixth full-length album. I have been looking out for this.

Fremad, the intro has something of Einheriersmarsien, the word Fremad means forwarts so this being some kind of march doesn’t really surprise. Thus we cross our hammers for Hammer I Kors. The first song of the record opens with the special Einherjer sound. There’s immediately a strong bass sound that goes on for the next 44 minutes. The characteristic vocal work from Frode Glesnes really defines the sound of Einherjer. All lyrics are Norse this time, just like on the previous record. On the older work there was a lot of English as well. Unless I got to use google translate a lot more now, I think of the Norse lyrics as a big improvement.

Nidstong, the fans already know this one. Last summer they’ve released this hit as an EP. I heard it live on Summerbreeze for the first time, even before I heard the EP version. This song is on fire! The album version isn’t much different from live, it goes on and on and you’ll stay tuned!
The Heathen Uprising, Hedensk Oppstandelse. The band said they wanted to build on the sound of their previous album, Norrøn. Personally I thought of Norrøn as a bit back to their old sound coming from Blot, which is a good thing if you ask me. While these men have now chosen to continue this way, the band returns to their old sound even more. More clean vocals, thick bass-lines and less distortion. Yet the band has 20 years of experience to add now, which is something you can hear in how everything is thought trough.

After 35 minutes it’s time for the last song, but fear not, this one lasts for nearly 11 minutes. From us, for us, the titletrack of this record. A worthy conclusion of an amazing record. Everything that’s great about Einherjer is in it, best song of the record and probably the best Einherjer song ever.

For fans of Einherjer, for fans of thick bass lines, for fans of Viking-metal and courageous warriors. This record is from us and definitely for us!