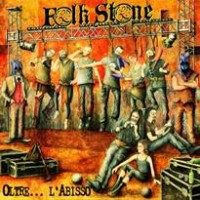 It hasn’t been that long since we last heard from Folkstone. The Italian band that was formed in 2004, released their third studio album ‘Il Confine’ under own management in 2012, shortly followed by a live DVD called ‘Restano i Frammenti’. These two releases were the definite break with label Fuel Records, and the band has since continued under the name of Folkstone Records. This year the band releases its fourth full-length album called ‘Oltre… L’Abisso’, a release that I have anxiously been waiting for!

As we have come to expect from Folkstone, the band has a lot to offer on the new album. The first track ‘In Caduta Libera’ is a powerful opener that immediately sets the tone for the album. The characteristic vocals of vocalist Lore are perfectly highlighted on the new album, as well as the harp that plays a prominent role in the music next to the large amount of bagpipes. The music is being supported by a great number of instruments, such as the bombard, hurdy-gurdy, cittern and flutes, which give the music a rich and varied sound. The album features a great number of songs that get stuck in your head, and is therefore very catchy. One of these songs is ‘La Tredicesima Ora’, which will be stuck in your head almost immediately. The real highlight of the album, however, is the song ‘Mercanti Anonimi’ in which we can hear the characteristic vocals op bagpipe player Roby alongside the vocals of singer Lore, and it sounds amazing! We might know the next track on the album ‘Respiro Avido’ as a previously released single, but it fits well on the new album. The song has a fair amount of tempo changes in which the harp is once again perfectly highlighted. There is nothing to complain about the mix of the new album, because the quality is once again above average. ‘Manifesto Sbiadito’ is the first song on the album that tends to go more towards a ballad in terms if rhythm, but this song is also performed with a lot of conviction. The fantastic vocals really stand out on this track, and the bagpipes are extremely catchy. If there is one the band is good at, it’s creating a dreamy atmosphere through their music, and that is a thing that has worked out perfectly on the new album. The fact that all of the songs are sung in Italian also contributes to this atmosphere. Another highlight on the album is the song ‘Nella mia Fossa’ that sounds very cheerful because of the bagpipe, guitar and drum parts. The song ‘L’Ultima Notte’, like so many other songs from Folkstone, has a lot of great bagpipe parts that really get stuck in your head. The last track of the album, which is also the title track, is a worthy ending of a wonderful album. ‘Oltre… L’Abisso’ is a fantastic song that has everything; a compelling rhythm, great vocals an surprising tempo changes. A fantastic end to a fantastic album!

With each new release from Folkstone it is once again clear that we are dealing with a bunch of wonderful musicians and performers. The versatility of the instruments, as well as the wonderful characteristic vocals of singer Lore make Folkstone’s music accessible to a wide audience, and will definitely appeal to fans of folk rock and folk metal alike. Unfortunately my knowledge of the Italian language is too rusty to understand all the lyrics, but they all sound equally beautiful. With Oltre… L’Abisso, Folkstone has once again released a fantastic album that I wouldn’t want to miss in my music collection. And besides listening to the new album over and over again, I fervently hope that I will have the opportunity to admire this band live someday. Belissima!