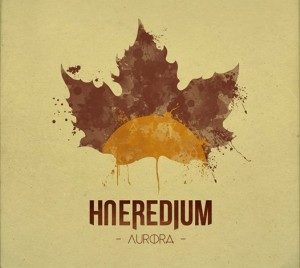 Haeredium is a band which originates from France. Founded in 2009, they finally released their debut album. This piece is entitled ‘Aurora’, and within 50 minutes the band has their chance to convince me.
Although this is their debut, the band worked towards this album for quite a long time.
And since they’re already founded in 2009, I expected a higher quality than what the band delivered. The reason? The music is just too standard. Named are influences like Korpiklaani and Ensiferum, and they can be heard clearly throughout the music. The music is slightly focused on the guitar melodies, complemented by flute and violin.
There are a few reasons why I’m not so impressed by this album, starting with the lack of variation. Between songs or even in the same song, there just isn’t enough variation. Halfway through the song I have the idea that I heard it already, just to find out that, after the song is –finally- finished, the next song is quite similar.
Another weakness are the vocals. Respect that you try to sing in French, English and German, but do it well or don’t do it at all. The vocals are nasal and monotone, and is in contrast with the often joyous melodies.
But let’s look at it from a positive side. Haeredium has set a stable base on which they could develop. The way each member uses their instrument is quite okay, so there are no problems with that. The problem is, however, that there needs to be more diversity and originality for this band to succeed.