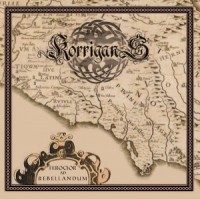 It is a well-known fact that Italy brings forth a large number of folk metal bands lately. The Korrigans is one of these bands, who will release their debut album ‘Ferocior Ad Rebellandum’ in 2014. After numerous changes in lineup, the Italian band managed to create a style of their own that varies between folk metal and black metal. The idea behind the Korrigans is to enrich different melodies from European and Celtic folk music with massive black metal components, in order to maintain the history of their ancestors and to keep their pagan traditions alive.

Ferocior Ad Rebellandum has become a concept album that tells the tale of the Volsci, an old Italic nation from the south of the Lazio-region, who rebelled against the Roman expansionism. The 10 tracks on the album mainly focus on the days of the battle of Corbione in 446 before Christ. The album combines historical events with the classic elements of old mythological and epic poems, and turns it into a chronological story that carries the listener on a journey from the rebellion of the Volsci to the Roman victory at the end of the battle.
After an Italian spoken intro the violence of the album breaks loose with the song ‘Latium Vetus’, in which the black metal components in the music immediately become clear. Folk metal, however, clearly has the upper hand on the album, which can be heard in the use of traditional folk instruments such as the bouzouki, low- & tin whistles and a large amount of accordion. The vocals on the album remind me of their fellow countrymen Furor Gallico at times, and are highly black metal oriented and entirely in Italian. Besides original songs, the album also features songs that are based on several different Irish jigs. For example, the song ‘Il Baluardo’ is based on the well-known songs ‘Morrison’s Jigg’ and ‘Cooley’s Reel’, which have been used by a great number of folk metal bands before them. The album continues its way with the song ‘Iter Bellicum’, which has been split into two separate songs; a metal track and a track with several acoustic elements. These songs are less catchy than their predecessors, but especially the keys and accordion are nicely highlighted in these tracks. The song ‘Bacchanalia’ sounds like a real party track that would probably do well live as a real crowd-pleaser. ‘Rebellio’ is an acoustically sung interlude that sets the tone for the title track of the album, ‘Ferocior Ad Rebellandum’ that starts with a catchy acoustic intro and quickly turns into a banging up-tempo metal track. ‘L’animo degli Eroi’ is a worthy final track for the album, and is able to keep your attention until the final note hits. Although the album might sound a bit monotone every now and then, there is enough variation between the instruments, vocal intermezzos and changes in pace to make it a versatile album.

With ten tracks and a playing time of 52 minutes, Ferocior Ad Rebellandum has become quite a fine album for a debut. The music is generally similar to a great many other bands, and therefore scores few points on originality. However, the album is interesting enough to listen to in terms of musicality. The vocals might be a little hard for everyone to listen to , but for fans of black metal tinged folk metal, there is plenty to enjoy. The Korrigans prove with this album that you don’t always have to understand the lyrics in order to enjoy a song. Definitely worth a listen!