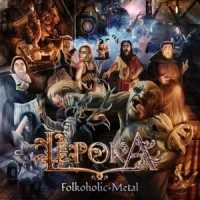 Looking at the cover of Folkoholic metal, the début-album of the Spanish band Lèpoka, there’s much that meets the eye. Elfs, trolls, dwarfs, shaman, but a sexy girl and a headbanging person are in the crowded room as well. What to think of this mess…?
And then there is this title Folkoholic metal, another beerfolk-metal album?
Yes and no. This album has some alcoholic beverages, but the title is referring to the percentage of folk in the metal. This is reaching the max, when you like folk, this is surely and album for you.
I’m not very fond of the Spanish language in metal, I can’t explain it, but it just doesn’t work for me. But Lèpoka manages to keep my attention, due to the awesome folktunes which are simply everywhere in their music.
Despite the fact the album is starting with acoustic guitar and flute in a very easy way, this doesn’t last for a minute, then the solid guitar, bass and drums hit you and you get the first Folkoholic metal song. And why call it otherwise, so the title of the first song is obvious.
But there’s more, not only cheerful folk, but the album has some epic tunes as well. Listen to Orfeo and you can hear the ‘epicness’ of Ensiferum, but this time in a full folk version.
And when we even get ‘ Jägermeister of puppets’, yes indeed, it is what you think, but don’t you go OMG WTF. Don’t you dare, because Lèpoka does it in their own way, nice refreshing, I love it.
Do we need something to shout on when they’re playing live? Resakoff!!! Nice rhythm, you’re not going to stand still with this one and even if you don’t know Spanish at all, you still can shout Resakoff.

Well, this album is simply superb. A remarkably nice album for a début of a band. Lèpoka puts an awefull lot of folk in everything they do. And this doesn’t mean there’s less metal. A very very very nice début, this album is. They hit the bullseye with this. The mess in the pub on the cover is a reflection of the album, but it never gets messy! What’s that? Who says I ever said I didn’t like Spanish language in metal? You, must have misunderstood 🙂
An awesome début!