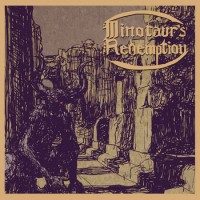 Minotaur’s Redemption has released a self-titled EP on which are 6 studio songs and a live bonustrack.
The band has a quite unique style, the music can be described as mix of trash and folk.
The band doesn’t use a lot of instruments, guitar, drums and bass lay down a rather aggressive sound. This leaves a lot of space for Lauren on the violin to fill in, and this is one of the big pro’s of the band. The violin-parts have a nice sad sound and seem to stand apart from the rest of the music sometimes. Normally I wouldn’t like this at all, but it seems to work for Minotaur’s Redemption. The violin is a soothing counterbalance to the aggressive music, with the highly energetic aroused voice of Lyon. Compliments for their courage to create a new sound.
The sounds of the album seems to come from under a thick blanket, the quality of sound is not the nicest. The songs seem a bit ‘one of a kind’, but this is also a bit caused by this smothered sound.
Regarding the quality, this should have been referred to as a demo. For an album the quality is just to poor.