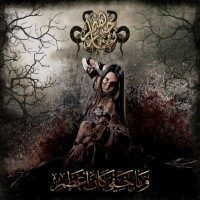 The fun part of writing for a website is that sometimes you get to review bands, you can’t even pronounce, let alone having heard of it before. And sometimes these bands seem to come from nations you’ve never heard any metal from. This time I get to review a band called Narjahanam from Bahrain. I don’t want to spoil the review yet, but this band is my best find of the year!

Heavy guitar violence even as Arabic snare instruments kick off this record and soon some Arabic stringed instruments follow up. Even the guitar-riffs of Narjahanam are clearly inspired on Arabic folk music. It immediately reminds of bands like Septic Flesh or Melechesh, but this is even louder. After one and a half minute, we get to hear the vocal works for the first time, insane brutal grunts. Perhaps not the most comprehensible, but if I’m not mistaken, most of the lyrics are in Arabic anyway, so even if I could hear what he was singing, I can’t understand it anyway. Even though Narjahanam produces a very brute and rude sound, the many folk-instruments and sounds make the record catchy and swinging as well.
In the second (even as unpronounceable) song of the album “Symphoniyat AlMowt” the band take some more time to get this song started. For this they use big, bombastic orchestral elements. Later in this song there’s more space for technical guitar violence as well. For fans of Fleshgod Apocalypse, Narjahanam is definitely something you will enjoy. Flawless this song rolls into the next, Ma Baina AlThulumat, where we take a bit tempo back, but none the less, the Arabian rampage goes on and on.
Hushood AlNar, if I’m right, it means “The fire of the crowd”. A song that starts with something like a group of marching man, this all flows into violence of guitars, something that’s a really big part of the album.
The album crushes on for a while until we reach my personal favorite, Sulaiman. Perhaps a bit less folky, but none the less very dance-able for that matter.
After the last song Kitab AlTuqoos I press the replay album button before writing down the last bit of the review.

As I said in the intro, Narjahanam is the best band I learned to know this year! For fans of the more deathmetal minded bands, especially if you’re into bands like Septic Flesh, Nile or Fleshgod Apocalypse, this is something you should look into. With Wa Ma Khufiya Kan A’atham I finally found an album I’m going to listen more often after writing a review.